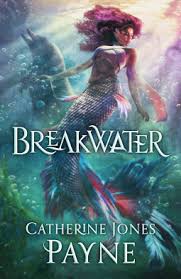 A red tide is rising.

As the daughter of one of the mer-king’s trusted advisors, seventeen-year-old Jade has great responsibilities. When her fiancé murders a naiad, plunging the underwater city of Thessalonike into uproar, tensions surge between the mer and the naiads. Jade learns too late that the choices she makes ripple further than she'd ever imagined. And as she fights against the tide of anger in a city that lives for scandal, she discovers danger lurking in every canal, imperiling her family and shattering the ocean's fragile peace.

Can the city's divisions be mended before the upwelling of hate rips apart everything Jade loves?

I gave this book 3 stars. It was creative and fun and it tackled Speciesism. That is probably the one and only time I will ever use that word. I actually had to look it up specifically for this review.

Now I love a good mermaid tail. Pun intended, obviously. So it really was no skin off my nose to read this book. It was, however, not really what I was expecting. I don't know, I feel like whenever I go into a mermaid novel I'm hoping it will be a bit dark and mysterious with a sort of Pirates of the Caribbean mermaid vibe. I never seem to get that though. This was a pretty standard mermaid novel though.

Even after finishing I still can't decide if I like the main character or not. Jade is the daughter of two prestigious merpeople, she was raised in the upper class and has been taught to always treat the Naiads right, with respect. Now, most of the other merpeople don't agree with this, the naiads are basically treated like leapers. Now while I commend the Jade for not being an asshole to the naiads, she basically kept trying to make herself a martyr throughout the book, just doing such stupid things all the time. It drove me crazy because her thought process was just so confounding at times. Someone would be really mad, like crazy mad, mad enough to kill her and she would be like "Oh, it's the perfect time to go out for a swim by myself, with no protection from threats whatsoever." Even when her mother told her not to. No common sense.

As for the story itself, we didn't get a lot of world building or any explanations for the most part. It was just sort of there and we either had to catch up fast or be left behind all confused as to what was happening. Now, I went into this book with no idea what a Naiad was, so I had to google because I was so confused. Honestly, I've never come across that word before. It's basically just a water nymph.

I can always appreciate a book with a murder plot and then you dive a bit deeper and there's just a huge mess under the surface. At first you think everything is fine, but in reality everything is just being held together by a couple threads. I liked how this played out and I can honestly say that I now need to read the next book. Spoiler alert there's a cliffhanger.

I would recommend this book to people who like mermaid books.
Posted by Jessie at 17:59