A Court of Wings and Ruin Review

A Court of Wings and Ruin
by Sarah J. Maas 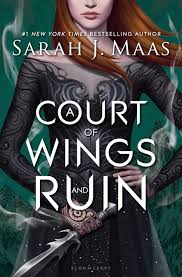 Looming war threatens all Feyre holds dear in the third volume of the #1 New York Times bestselling A Court of Thorns and Roses series.

Feyre has returned to the Spring Court, determined to gather information on Tamlin's maneuverings and the invading king threatening to bring Prythian to its knees. But to do so she must play a deadly game of deceit-and one slip may spell doom not only for Feyre, but for her world as well.

As war bears down upon them all, Feyre must decide who to trust amongst the dazzling and lethal High Lords-and hunt for allies in unexpected places.

In this thrilling third book in the #1 New York Times bestselling series from Sarah J. Maas, the earth will be painted red as mighty armies grapple for power over the one thing that could destroy them all.

I gave this book 5 stars. Sarah J. Maas somehow always writes exactly what I want to read. She never seems to miss the mark and I love that. It was completely evident in this book. This story was a whirlwind of adventure and action. Would not change it for the world.

I lucked out when I preordered this because when they sent it out I ended up getting it a day early. Yay for me! I pretty much spent my whole day reading this book. Only took me about 7 hours to get through the whole thing. Sadly, I'm a bit ADHD so I couldn't read the entire thing through without taking breaks and such. I wanted to read it all the way through since it was very captivating, but 7 hours is kind of a long time to do nothing but read a single book.

A thought that seemed to be on rerun throughout this entire book was "Tamlin, you bastard". Seriously, if you didn't hate him after ACOMAF, then you will definitely hate him after this one. Even though he ended up doing the right thing and helped them with the fight against Hybern, it doesn't counteract the fact that he's an asshole.

Unlike most people, I didn't really like Lucien at first. In the first book he was kind of an asshole who I didn't care about at all, and then in the second book he was even worse, but finally in this book he finally showed the part of himself that I actually liked. He was so unsure about his place int he world and a bit cranky about the way he was treated by his family. He just wants the best for his mate and those he cares about. He may be a bit misguided at times, but he means well.

I love Suriel. He just comes in every once in a while to give great life advice and then he disappears again. I was absolutely devastated by his death. Why did Sarah have to do that to us? Why?????

My favourite part of this whole book was probably the plot twist near the end. I'm not gonna give away who this was, because I feel like you should find out for yourself, but let's just say that one of the characters that is part of a ship is interested in their own gender so that ship has sunk. I was totally not expecting it, I legit gasped when I read it. It threw me completely off guard, but I'm interested to see where this will go in the future.

What I never expected was to love Jurian as much as I did. I was really wary of him from what I'd read in the last book. He seemed like someone who would come in and just be very antagonistic and ruin some lives, but he wasn't. He seemed to be a total asshole, but he was an asshole spy. I appreciate him.

Feyre went through some major character development in the second book, and I loved that, but we finally got to see the aftermath of this development. Feyre was snarky and sassy, she didn't any fucks. She rolled her eyes when Tamlin said something misogynistic and I died laughing at some of her inner monologue.

Feyre and Rhys were like an old married couple in this book. I know they've barely been together for a year, but it seems like they've been together for decades. They bicker, and they have really steamy scenes, and they just like spending time together. Relationship goals right there. They're just there trying to guide everyone else's love lives. Their like meddling grandparents. It's cute. Also, every time Feyre sees the Bone Carver, he's in the shape of Feysand's son. I'm feeling a lot of feelings about that. I hope they have a child during the series.

Overall, that was probably the most satisfying ending to a book ever. We finally got to see what Amren was, none of the main characters died, for long, and the ships happened. They happened!

“And my heart shifted a bit in my chest as I said to him with no guile whatsoever, “I won’t tell anyone unless you say so.” The weight of that jeweled knife and belt seemed to grow. “I wish I had been there to stop it. I should have been there to stop it.” I meant every word. Lucien squeezed our linked arms as we rounded a hedge, the house rising up before us. “You are a better friend to me, Feyre,” he said quietly, “than I ever was to you.”

“Lucien only nodded. But I felt his gaze on my back, fixed right on my spine, as I headed downstairs. To see Ianthe. And at last decide how I was going to shred her into pieces.”


“It's a rare person to face who they are and not run from it - not be broken by it.”