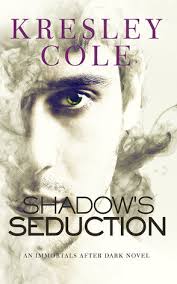 In this scorching Immortals After Dark/Dacian novel, #1 New York Times bestselling author Kresley Cole brings together a wicked vampire prince used to getting everything he desires and a demon warrior who always felt like an outcast.

A night of debauchery . . .
Prince Mirceo Daciano and his new friend, Caspion the Tracker, comb the streets of Dacia, drunkenly seeking out pleasures of the flesh. In what should have been a typical night, they coax a bevy of nymphs to bed. To impress their females, the demon and the vampire kiss on a dare.

Changes them forever . . .
Once they finally break away from their soul-searing kiss, they find themselves alone—and shaken. Had they imagined their explosive chemistry? Obstacles—ranging from a death sentence to exile in a war-torn dimension—threaten to destroy their lives . . . and the vulnerable promise in that one kiss.

How long can they resist the fire that blazes between them?


Even if Mirceo can accept Caspion as his fated mate, the seductive vampire still must convince the stubborn demon that their bond is forever. And any royal Dacian union must receive the blessing of King Lothaire, an unpredictable and savage killer...

I gave this book 5 stars. This is the 17th book in the Immortals After Dark Series and the second book in the Dacians series. It can be read as a standalone, but I personally feel that reading the whole series in order really enhances the experience.Anyway, if you guys love adult romance, this is the series for you.

I love Kresley Cole’s writing style, which is why i continue to keep reading her books. I also love her characters. They’re just so fun and badass, plus they’re hilarious.

I love gay romances. I’ve read so many straight romances that I know the drill. It’s a bit hard to surprise me in that aspect. Gay romances, however, are an entirely different thing. They have their own different set of struggles. This is some new territory and I love exploring it. I think this book did a fantastic job of that.

The one thing that just kept psyching me out was the fact that at the start of the book Mercio was older and then in the middle it was switched around and Cas was older. I kept forgetting and it just weirded me out.

My personal favourite part of this book was when we all thought that Lothaire was a raging homophobic but he really just didn’t like demons. Beautiful.

I almost forgot to mention, it actually happened! A book in this series came out without any Nix! I miss my Nix!

(There was a quote I wanted to add, but I try to keep this a pg-13 blog and I will not be subjecting you guys to disgusting jokes that I find funny. Le sigh.)

“Dacians consider Trehan the kingdom’s sword, Viktor its wrath, Stelian its sentinel, and Lothaire its cunning. Our people see Mina and me as the beating heart of Dacia.”

“You’re under my skin, Mirceo. When we parted, you took my heart with you. Go easy with it, okay?” “I’ll protect it forever, just as you’ll protect mine.” “You”

“You stay on me like my godsdamned shadow, vampire."
Mirceo's lips curved. "Eternally, demon.”
Posted by Jessie at 07:18