Nowhere but Here
by Katie McGarry 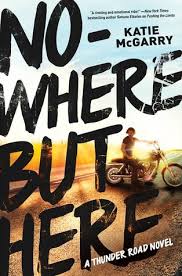 Seventeen-year-old Emily likes her life the way it is: doting parents, good friends, good school in a safe neighborhood. Sure, she's curious about her biological father—the one who chose life in a motorcycle club, the Reign of Terror, over being a parent—but that doesn't mean she wants to be a part of his world. But when a reluctant visit turns to an extended summer vacation among relatives she never knew she had, one thing becomes clear: nothing is what it seems. Not the club, not her secret-keeping father and not Oz, a guy with suck-me-in blue eyes who can help her understand them both.

Oz wants one thing: to join the Reign of Terror. They're the good guys. They protect people. They're…family. And while Emily—the gorgeous and sheltered daughter of the club's most respected member—is in town, he's gonna prove it to her. So when her father asks him to keep her safe from a rival club with a score to settle, Oz knows it's his shot at his dream. What he doesn't count on is that Emily just might turn that dream upside down.

No one wants them to be together. But sometimes the right person is the one you least expect, and the road you fear the most is the one that leads you home.

I gave this book 4 stars. It was everything I have come to love about Katie McGarry's writing. The characters were so real, the plot line was engaging, and the atmosphere was just so exciting!

I personally found Emily to be really annoying for the first half of the book. I really did not like her. I guess it was because of her circumstances, but that didn't make me any less annoyed with her. She was just being so awful to Eli. She justified this by saying he didn't want her, but obviously he did or he wouldn't waste his time on her. She was also pretty naive about pretty much everything. Despite her being freakishly annoying for the first half of the book, she did get better.

Oz was pretty good on the not annoying me scale. He was consistent. He was a pretty basic book boyfriend. Not my favorite character, but I did still like him.

Now, the other characters in this book, I am excited to read about. Razor, Chevy, and Violet. Now those are some stories that I am ready to read. The hype for the next two books is real.

I was really upset by Olivia's death. I didn't cry, just because I wouldn't let myself cry. It was also kind of suddenly written so I was a bit taken off guard, similar to what happened in TFIOS. I loved Olivia though. She was a strong, confident woman, and a phenomenal role model.

Eli was a teddy bear. I'm still upset that he didn't end up with Meg. I was so sure in the middle of the book that they would work things out, but I guess she really does love her new husband. I still find it sad though. He still loves her.

I liked that it had a duel point of view. It gave me more perspective, also gave me hints to what the huge secret was. It also gave me insight on all the different characters and their troubles. It set it up nicely for the sequels.

Overall, it was a really nice read. I would recommend this to you if you enjoy contemporary, romances, and any of Katie's other works.

“This is your family … If you learn to love us then you will forever have our love in return.”

“Running is still running. It doesn't matter if it's a physical move from one place to another or if it's to within yourself.”

“The world is a huge place. How will you know where you fit in unless you explore beyond your comfort zone?”

“There’s a reason why people shouldn’t talk at four in the morning. Exhaustion eliminates the ability to lie. It demolishes the ability to tiptoe around the truth. Emotions are too exposed and real. Heightened to the point of explosion.”