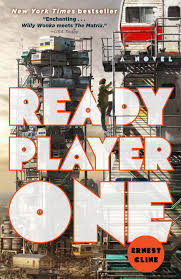 Like most of humanity, Wade Watts escapes his grim surroundings by spending his waking hours jacked into the OASIS, a sprawling virtual utopia that lets you be anything you want to be, a place where you can live and play and fall in love on any of ten thousand planets.

And like most of humanity, Wade dreams of being the one to discover the ultimate lottery ticket that lies concealed within this virtual world. For somewhere inside this giant networked playground, OASIS creator James Halliday has hidden a series of fiendish puzzles that will yield massive fortune — and remarkable power — to whoever can unlock them.

For years, millions have struggled fruitlessly to attain this prize, knowing only that Halliday's riddles are based in the pop culture he loved — that of the late twentieth century. And for years, millions have found in this quest another means of escape, retreating into happy, obsessive study of Halliday's icons. Like many of his contemporaries, Wade is as comfortable debating the finer points of John Hughes's oeuvre, playing Pac-Man, or reciting Devo lyrics as he is scrounging power to run his OASIS rig.

And then Wade stumbles upon the first puzzle.

Suddenly the whole world is watching, and thousands of competitors join the hunt — among them certain powerful players who are willing to commit very real murder to beat Wade to this prize. Now the only way for Wade to survive and preserve everything he knows is to win. But to do so, he may have to leave behind his oh-so-perfect virtual existence and face up to life — and love — in the real world he's always been so desperate to escape.

A world at stake.
A quest for the ultimate prize.
Are you ready?

I gave this book 5 stars. It was a breath of fresh air. This isn't the type of book I normally read, which is why it surprises me that I liked it so much. It was fun and exciting. I liked the fact that it wasn't in the distant future, but in a future where, hopefully, I'll still be alive.

This book was definitely driven by plot, I was sitting on the edge of my seat the whole time wondering what kind of plot twist would happen next. It was exhilarating.

What worried me about the book was, it's not really far off about the whole future thing. Pollution is only getting worse, poverty is probably going to get worse. It's going to be a real shit show. Also, the fact that everyone is more into technology than ever, doesn't seem that far off. It's absolutely going to happen, how much? I don't know, but I do think that this book came pretty close. Hopefully not, but probably.

This book also contained the perfect amount of romance in my opinion. I love romances, but sometimes it's just so caught up in the romance that nothing else matters and that bothers me sometimes. I also don't like when there's no romance, because I need love. This book had a good amount. There was a relationship that was a bit will they or won't they, they were trying to figure things out, it wasn't like they just fell for each other instantly. They have lives apart from each other and they repeat that. Also, like Magnus Bane once said, nerd love is a beautiful thing.

I love a book where the antagonist is just so evil and I hate them so much to the point where I swear my blood boils just thinking of them. This book had that.

I loved that I understood so many of the references. There were still a few I didn't get, I'm not fully not he bandwagon yet, but I got a large portion of them and that brought me great joy. Also, I have to mention that I don't play video games. Not at all, but I didn't have any less of an understanding because of this.

It was also incredibly funny. I found myself laughing out loud when I was reading it. In public I might add. People gave me weird looks. That's okay though, because I had fun. I totally identified with Wade. He was self deprecating and obsessively nerdy. Me. That is me. This is why I started a blog about books.

I'm so sad that I waited so long to read this. Just don't make the same mistake I made, just read it already!

“People who live in glass houses should shut the fuck up.”

“Going outside is highly overrated.”

“No one in the world gets what they want and that is beautiful.”

“You'd be amazed how much research you can get done when you have no life whatsoever.”

“I watched a lot of YouTube videos of cute geeky girls playing '80s cover tunes on ukuleles. Technically, this wasn't part of my research, but I had a serious cute-geeky-girls-playing-ukuleles fetish that I can neither explain nor defend.”

(Yes, finally some quotes! I forgot to write down quotes while I was reading this book or at least marking off the pages so I found my quotes on Goodreads. I just copy and pastes the first four in a row because they were pure gold. This is quality content.)