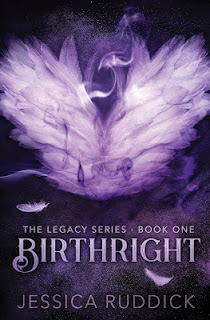 How do you live with yourself when you decide who dies?

Ava Parks would have killed for an iPod for her sixteenth birthday. Anything would have been better than coming into her birthright of being a seeker for the Grim Reaper, an arrangement made by her fallen angel ancestor in exchange for his re-admittance to heaven. And she isn’t just any seeker—she finds souls that have the potential for becoming angels and sentences them to death. A year and two souls into her role as a seeker with her conscience overflowing with guilt, Ava comes up with a plan to thwart the system. When it goes awry, she is forced to submit the name of a classmate, Cole Fowler, an ornery, rough around the edges guy who always seems to come to her rescue, whether she likes it or not. Her feelings for Cole prompt her to intervene, and she saves him from death, upsetting the Grim Reaper’s agenda.

While Ava schemes to find a way to save Cole, she learns he has some secrets of his own. She lets him believe he is protecting her, and not the other way around, until a final showdown with the Grim Reaper forces Ava to make choices Cole may never forgive.

I gave this book 4.5 stars. This book reminded me exactly why I love Young Adult books so much. It had the cute bickering romance between two people who have endless chemistry. It has a plot line for days. And the drama! I love it!

This book was like a cross between Jessica Sorensen's writing and Jennifer L. Armentrout. It pretty much had all the amazingness you should expect from reading the synopsis.

I liked the writing style. It was straight forward and nothing was overly vague or over described. It was straight to the point and I understood exactly what was happening at any given moment.

If I hadn't been as busy as I was I could have read this one straight through. It was addicting to say the least. It was like the sort of book I haven't gotten to read in a long time. It felt great to get back to it. I'm interested to see where the author goes with the series. There's definitely going to be some major drama in the next book.
Posted by Jessie at 23:17