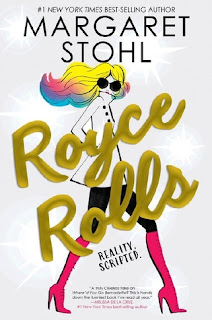 Sixteen-year-old Bentley Royce seems to have it all: an actual Bentley, tuition to a fancy private school, lavish vacations, and everything else that comes along with being an LA starlet. But after five seasons on her family's reality show, Rolling with the Royces, and a lifetime of dealing with her narcissistic sister, Porsche, media-obsessed mother, Mercedes, and somewhat clueless brother, Maybach, Bentley wants out. Luckily for her, without a hook for season six, cancellation is looming and freedom is nigh. With their lifestyle on the brink, however, Bentley's family starts to crumble, and one thing becomes startlingly clear--without the show, there is no family. And since Bentley loves her family, she has to do the unthinkable--save the show. But when her future brother-in-law's car goes over a cliff with both Bentley and her sister's fianc inside-on the day of the big made-for-TV wedding, no less-things get real.
Really real. Like, not reality show real.

Told in a tongue-in-cheek voice that takes a swipe at all things Hollywood, Royce Rolls is a laugh-out-loud funny romp with an LA noir twist about what it means to grow up with the cameras rolling and what really happens behind the scenes.

***I received and ARC through NetGalley***

I gave this book 4 stars. I have to admit, I really wasn’t loving this book in the start, which is why it has taken me so long to finally finish it. I’m glad I did finally get though it though, I really liked this book.

It took some time, but I came to love all of the characters. All of them. Despite their numerous flaws, you could see that they were still human. They had issues and they had compassion and love. These characters have stolen my heart. I have to say, if this was actually a reality show, I would probably watch it. This is a high compliment considering I never watch reality tv.

The last quarter of the book was definitely the best. I seem to have this thing were I don’t really like the first half or so of books, but I love their climaxes. The climax of this book, personally saved it for me, I had an incredible time. Lots of glorious drama.

This is the first book of Stohl’s that I’ve attempted to read since I tried to get through Beautiful Creatures, and I have to say, I enjoyed this book enough to give BC another try.

I would definitely recommend this book to others. Maybe not if you aren’t into drama, or really don’t like reality tv and the likes.

Also, I quickly have to mention that I totally love the cover.
Posted by Jessie at 23:21