All the Light We Cannot See Book Talk

All the Light We Cannot See
by Anthony Doerr 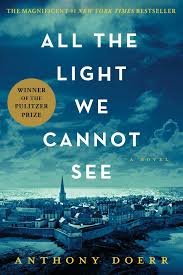 
From the highly acclaimed, multiple award-winning Anthony Doerr, the beautiful, stunningly ambitious instant New York Times bestseller about a blind French girl and a German boy whose paths collide in occupied France as both try to survive the devastation of World War II.

Marie-Laure lives with her father in Paris near the Museum of Natural History, where he works as the master of its thousands of locks. When she is six, Marie-Laure goes blind and her father builds a perfect miniature of their neighborhood so she can memorize it by touch and navigate her way home. When she is twelve, the Nazis occupy Paris and father and daughter flee to the walled citadel of Saint-Malo, where Marie-Laure’s reclusive great-uncle lives in a tall house by the sea. With them they carry what might be the museum’s most valuable and dangerous jewel.

In a mining town in Germany, the orphan Werner grows up with his younger sister, enchanted by a crude radio they find. Werner becomes an expert at building and fixing these crucial new instruments, a talent that wins him a place at a brutal academy for Hitler Youth, then a special assignment to track the resistance. More and more aware of the human cost of his intelligence, Werner travels through the heart of the war and, finally, into Saint-Malo, where his story and Marie-Laure’s converge.

I gave this book 5 stars. It was beautiful and tragic. It reminded me why I don't read a lot of fiction. Just plain old fiction, no fantasy or sugar coated romance. Just plain old undistorted reality. It wasn't because it was bad, not at all, it was just too real at times. It makes me really sad. I was completely shell shocked at times.

I was constantly worried about the characters, it didn't even get too bad until nearing the end. My jaw hit the floor when the book went into Jutta's perspective. She was just with her foster mother and sisters, then all of a sudden they are being invaded by Russians. Pretty much up until this point, things didn't seem to be going as terribly as you would think during a war, but then this group of girls got raped by these three Russian soldiers. These girls were nothing more than a commodity to the soldiers. Because they were on the other side of the war, these girls were treated less than human.

I was happy for Jutta at the end of the book. Despite having this terrible thing happen to her she managed to move forward. She became a teacher, got married to a man she loves, and who loves her. They had a happy life together, even having a son.

I was so fascinated by the connection that the leads had. They only spent a day together in their entire lives, and yet it felt like they had known each other a lifetime. I thought that they would have more time together, or at least have something more than what they got. In the end, the little time they had together, I found worth it.

I didn't have time to get to upset about Werner's death. It just happened too quick for me to even react right away. After I finished the book it hit me, but for some reason I didn't cry at all. I was just filled with a feeling of foreboding and there was nothing to ease my fears because it's a stand alone.

I was happy, however, that Marie-Laure made it through the war and made a life for herself in America. She surrounded herself with people she loved and didn't let the bad things from the past keep her from moving onward.

The plot was exciting to say the least. My favourite part was the story of the tale of the Sea of Flames stone. It was the little bit of fairy tale in the cold harsh reality of life. It was this little thing that tied in so well to the plot. Something worth fighting for. It gave that little extra kick to it, Werner risked his life to bring it back to Marie-Laure, it went to his sister, who after all these years, went out of her way to find Marie-Laure. It was the catalyst to the whole plot.


“So how, children, does the brain, which lives without a spark of light, build for us a world full of light?”

“You know the greatest lesson of history? It’s that history is whatever the victors say it is. That’s the lesson. Whoever wins, that’s who decides the history. We act in our own self-interest. Of course we do. Name me a person or a nation who does not. The trick is figuring out where your interests are.”

“All your life you wait, and then it finally comes, and are you ready?”


“What do we call visible light? We call it color. But the electromagnetic spectrum runs to zero in one direction and infinity in the other, so really, children, mathematically, all of light is invisible.”