Up in Flames Book Talk

Up in Flames
by Abbi Glines 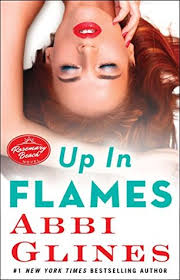 The villain of Rosemary Beach finally gets her own happy ending in the long-awaited final novel of the #1 New York Times bestselling new adult romance series by Abbi Glines.


The blockbuster #1 New York Times bestselling Rosemary Beach series ends with a bang when the troubled character readers love to hate gets her very own happily ever after in this eagerly anticipated and overwhelmingly requested story. Known for causing problems for everyone in Rosemary Beach, Nan has been growing up lately, and she’s finally taking center stage—and finding love with the man she least expected.

I gave this book 5 stars. I loved it. I mean I usually love all of Abbi Glines' writing, but I think this one may just be my new favourite. It was so much different than her usual writing. She wrote about the usual protagonist of the series. I loved that aspect. The first thing I did when I got up this morning was buying this book. I have been heavily anticipating this book for a long time now, it's finally here.

From the very beginning of the series, I wanted Nan to redeem herself. She was just so hateful, that I new her story would be great. I personally love stories about the "Bad Guy". The bad guy usually has a very complex background. There is something about them, something about their past that made them the way they are. There is also something in the future that will seal their fate. They can either become worse, or they can redeem themselves. Nan did a very good job with her redemption.

I was very confused at the beginning of the book because, Nan was with Major. I had a sort of bet with myself that she would end up with Cope, because from what was shown in the past books was that they were basically as opposite as opposite could get and Nan and Major were just way to similar to actually get together. It turns out my theory from the beginning was right and Nan did fall for Cope.

I hadn't really learned much about Cope from the earlier books other than the fact that he was stone cold and could kill as easily as breathe. I for some reason didn't expect him to be as hard-assed to Nan as he was, I mean I liked it enough, it just surprised me a bit. I think he complements Nan very nicely and gives her exactly what she needs. I love them together.

Major. I honestly started to hate him around the middle of the book. He was getting between Nan and Cope and that had to stop. The next thing you know he died and I was surprised. I had to go back and reread the paragraph before because I did not see that coming at all. And then it turned out that he hadn't died and I wanted to be surprised, but I really wasn't. I kind of expected it because they didn't seem like the type that would be careless enough to die like that.

I loved the fact that Nan had reformed her ways and made up with those in her life. She made up with her brother, made some friends in Blaire and Bethy. She wouldn't even introduce her father to the drug lord, Franco. She didn't want to cause that kind of trouble for him despite everything he put her through. Nan stopped being that jealous little girl and she grew up a bit in this book. I loved everything about it.

"Villains were created, not born."

"I trusted you with me. Like I knew we would, we clicked. Locked into place like two pieces waiting for their match."

"I was done wasting my time on wanting a man who didn't want me. I wouldn't pout or sulk. I'd just go to Vegas."