The Winner's Curse
by Marie Rutkoski 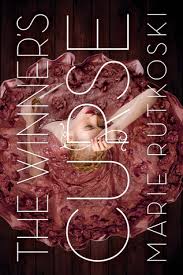 Winning what you want may cost you everything you love...

As a general’s daughter in a vast empire that revels in war and enslaves those it conquers, seventeen-year-old Kestrel has two choices: she can join the military or get married. But Kestrel has other intentions.

One day, she is startled to find a kindred spirit in a young slave up for auction. Arin’s eyes seem to defy everything and everyone. Following her instinct, Kestrel buys him—with unexpected consequences. It’s not long before she has to hide her growing love for Arin.

But he, too, has a secret, and Kestrel quickly learns that the price she paid for a fellow human is much higher than she ever could have imagined.

Set in a richly imagined new world, The Winner’s Curse by Marie Rutkoski is a story of deadly games where everything is at stake, and the gamble is whether you will keep your head or lose your heart.

I gave this book 5 stars because I loved it. I loved every minute of this, I picked it up on a whim, from the synopsis I thought it was going to be very instalovey but it wasn't and I'm happy. I read this in one day.

I have to rant about something. I ordered this book online and I was expecting to get that beautiful cover from above, but instead I got the ugly stepsister, look at it: 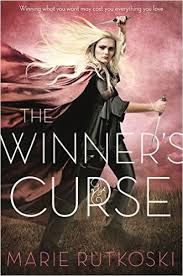 When you first look at it, it might not seem that bad, but after a while you can start to see all the issues. Like the fact that it has someone's face on it. That is like my number one cover pet peeve. I hate it when there is a full frontal view of someone's face on the front. I hate it. I want to picture them my way and I can't do that if it already has a face on it. Also, the sky is pink, and what the hell is she doing with the daggers? What magical ritual is she doing? I don't even understand. I just want to scream.

Okay rant over, I finished this book in the one day that I was reading it, it was fast paced and not at all instalovey and I was so happy by this. It was so easy to read and I cannot wait to get the next two books because I will be getting those two at the same time so that I can binge. There are my weekend plans.

I actually really liked the main character, I really did not think I was going to like her, once again because of the synopsis, telling me she was a whiny little rich girl. I feel like the synopsis was a very misleading thing because it also implied that Arin and Kestrel fell into instalove and that Kestrel bound Arin to herself in an unbreakable way. Maybe that was a good thing because it kept me on my toes, I didn't really know what to expect from it.

I ship Arin and Kestrel so hard, seriously I need to read the other two books so I can make them an official OTP. Because I think that they could be it. I ship it.

I was so happy when Cheat died, at first I thought that maybe he would be able to be a good leader, he seemed like it at first, but then he met Kestrel and I realized he would definitely not be a good leader, I was very happy indeed.

I'm not as anxious as I should be after the ending of the first book, Kestrel is not going to marry the emporer's son, she just isn't, she will find a way out of it, or Arin will get her out of it. Kestrel is really smart and she is very good with strategizing. Seriously, I'm not worried at all. I just really want the next book.

This book was not very heavy, it was actually a very light read, if you do end up reading this though, be ready to read the next book right away, it's a necessity. Be WARNED.

“Isn't that what stories do, make real things fake, and fake things real?”

“He knew the law of such things: people in brightly lit places cannot see into the dark.”

“The truth can deceive as well as a lie.”

“He lifted her up onto the table so that her face was level with his, and as they kissed it seemed that words were hiding in the air around them, that they were invisible creatures that feathered against her and Arin, then nudged, and buzzed, and tugged.Speak, they said.Speak, the kiss answered.”