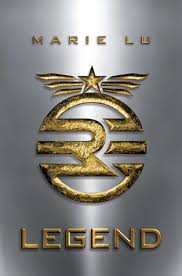 What was once the western United States is now home to the Republic, a nation perpetually at war with its neighbors. Born into an elite family in one of the Republic's wealthiest districts, fifteen-year-old June is a prodigy being groomed for success in the Republic's highest military circles. Born into the slums, fifteen-year-old Day is the country's most wanted criminal. But his motives may not be as malicious as they seem.

From very different worlds, June and Day have no reason to cross paths—until the day June's brother, Metias, is murdered and Day becomes the prime suspect. Caught in the ultimate game of cat and mouse, Day is in a race for his family's survival, while June seeks to avenge Metias's death. But in a shocking turn of events, the two uncover the truth of what has really brought them together, and the sinister lengths their country will go to keep its secrets.

I gave this book 5 stars. I started reading it and just sat and read it until I was done. It was the best book I've read in a while. I loved it.

The one issue I had with this book, is the fact that they are 14 and 15. It isn't that they are young that bothered me. It's the stuff that they do at that age. They seriously do not act that age. If I had read this book and hadn't known their ages I would have said that they were at least 17 or 18. It just wasn't believable.


"He kisses me gently at first and then, as if he's reaching fir something more, he pushes me against the wall and kisses me harder."

This is not 14 year old behaviour.

I loved the plot. It was rich and exciting. It had me on the edge of my seat. When June went under cover, I honestly didn't know who I was going to root for. I wanted June to avenge her brother, but at the same time I wanted Day to keep on being the badass that he was.

Unpopular opinion: I actually liked Thomas. It's that thing I have, I just have this thing for assholes. I liked Sebastian from The Mortal Instruments, I liked Draco Malfoy from Harry Potter, and I liked Aaron Warner in Shatter Me, before he redeemed himself of course.

Strangely enough, I didn't hate any of the characters. I was in my own way rooting for them all to win. Except, the assholes who did what they did to Day and his family.

Okay, on to the physical aspects of the book. I loved the fact that the book had coloured ink. I love it when books do that. I loved it when I read Shiver, and I love it now. I just really love pretty books, people who say "Don't judge a book by it's cover." obviously never owned a pretty book. It gave it a little something extra while also helping me keep track of which point of view it was in.

Overall, I was very satisfied by this book and hope to continue on in the series soon. I would recommend this book to everyone because it was the perfect blend of everything good in a book.

“Forever and ever, kid, until you're sick and tired of seeing me.”


“My mother used to hope that I would rise up from my humble roots. Become someone sucessful, or even famous. I'm famous all right, but I don't think it's what she had in mind.”


“So, tell me,” he whispers. “How fast did you climb those fourteen stories?”Thomas makes a disapproving sound in his throat, but I break into a grin. Storm’s past. Metias loves me again. “Six minutes,” I whisper back to my brother. “And forty-four seconds. How do you like that?”“That must be some sort of record. Not that, you know, you’re supposed to do it.”