The Radius of Us Book Talk (Spoiler Free)

The Radius of Us
By Marie Marquardt 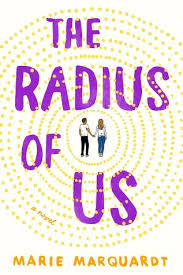 What happens when you fall in love with someone everyone seems determined to fear?

Ninety seconds can change a life — not just daily routine, but who you are as a person. Gretchen Asher knows this, because that’s how long a stranger held her body to the ground. When a car sped toward them and Gretchen’s attacker told her to run, she recognized a surprising terror in his eyes. And now she doesn’t even recognize herself.

Ninety seconds can change a life — not just the place you live, but the person others think you are. Phoenix Flores-Flores knows this, because months after setting off toward the U.S. / Mexico border in search of safety for his brother, he finally walked out of detention. But Phoenix didn’t just trade a perilous barrio in El Salvador for a leafy suburb in Atlanta. He became that person — the one his new neighbors crossed the street to avoid.

Ninety seconds can change a life — so how will the ninety seconds of Gretchen and Phoenix’s first encounter change theirs?

Told in alternating first person points of view, The Radius of Us is a story of love, sacrifice, and the journey from victim to survivor. It offers an intimate glimpse into the causes and devastating impact of Latino gang violence, both in the U.S. and in Central America, and explores the risks that victims take when they try to start over. Most importantly, Marie Marquardt's The Radius of Us shows how people struggling to overcome trauma can find healing in love.

I received an arc through a Goodreads Giveaway.

I gave this book 4 stars. It was such a cute book. It showed the side of immigration that I've never really thought about before, it showed me a lot of things I never really dwelled on to long. It was a bit eye opening and it was a very solid read.

To me the themes of the story was just so important. A book about the difficulties in immigration, racism, and not knowing where you belong. The uncertainty of life in this new place. Also, the whole moving on in your life after a terrible thing happens to you. The difficulty in rehabilitating.

The bond between the protagonists made me happy. They just bonded in a seamless sort of way. They became friends, just slowly worked through everything together, and throughout the whole mess of their lives, they leaned on each other for support.

There were these little drawings in the book drawn by one of the characters and they were so well done. I loved those, they were like this little bit of ease from all the heavy contents of the novel.

Okay this part might be a little spoilery, but only if you're very sensitive, so skip this paragraph. I was so relieved by the end of the book. The characters found their closure and found each other, the book was the happiest ending I thought they could have and that made me happy. They learned that they were loved and cared for no matter who they were and they became better for that.

Sadly, this is an arc, so no quotes this time. You'' just have to take my word for it, that this book is worth reading!