Tales from the Shadowhunter Academy Review 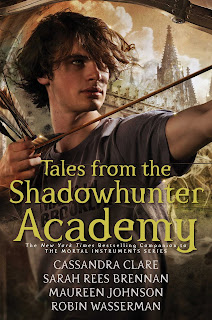 Simon Lewis has been a human and a vampire, and now he is becoming a Shadowhunter. But the events of City of Heavenly Fire left him stripped of his memories, and Simon isn’t sure who he is anymore. He knows he was friends with Clary, and that he convinced the total goddess Isabelle Lightwood to go out with him…but he doesn’t know how. And when Clary and Isabelle look at him, expecting him to be a man he doesn’t remember…Simon can’t take it.

So when the Shadowhunter Academy reopens, Simon throws himself into this new world of demon-hunting, determined to find himself again. His new self. Whomever this new Simon might be.

But the Academy is a Shadowhunter institution, which means it has some problems. Like the fact that non-Shadowhunter students have to live in the basement. And that differences—like being a former vampire—are greatly looked down upon. At least Simon is trained in weaponry—even if it’s only from hours of playing D&D.

Join Simon on his journey to become a Shadowhunter, and learn about the Academy’s illustrious history along the way, through guest lecturers such as Jace Herondale, Tessa Gray, and Magnus Bane. These ten short stories give an epilogue to the Mortal Instruments series and provide glimpses of what’s in store in the Dark Artifices.

I gave this book 5 stars. I absolutely adored everything about this book. It gave me everything I didn't know that I needed. Showed me so much stuff i didn't know I was missing. I'm completely addicted to this book.

This book got me so excited for the Last Hour. At first I wasn't all that excited for that series, but after reading about James Herondale for about a chapter, I have fallen in love. I can't wait to see what kind of mischief him and Matthew will get into as parabatai.

Another thing that I loved was the bit of insight we got on Robert Lightwood's past. It finally makes sense to me why he was so horrible to Alec when he first found out that he was gay. It just made me so sad the way that Robert treated Michael when he found out. Michael was just such a sweet guy and I didn't want that for him. Honestly, this book just made me hate Robert Lightwood more.

Up until the part where he met Alec's child. You could tell her had a lot of regret about the way he had treated people, he even wanted them to name the child Michael. That showed me that he did care.

The scene where all of the Lightwoods were in Magnus and Alec's apartment and were discussing the baby was probably my favourite part of the book, that means it was really good because there were several standout parts of that book.

Is it just me or has Jace gotten even funnier? Honestly, I really love him, he just cares about everyone so much and he loves messing with them. He's also incredibly vain, but in the best way possible, if that makes any sense.

The part that made me saddest was the end of the chapter with Helen. It talked about what really happened with Andrew Blackthorn and his fae lady love. It made me so sad. Andrew died thinking that she didn't love him and that she had enchanted him to love her. I did not cry during this book, but the closest I came was during this part.

I became more appreciative of Sizzy in this book. During the Mortal Instruments series, they were sort of my least shipped ship, I didn't really care if they were together, but now, I honestly think I would cry if they ever broke up. This book was the perfect epilogue to the Mortal Instruments and would have been the perfect introduction to The Dark Artifices and The Last Hour series's. Sadly, I did read Lady Midnight before this, but I do think it would be better to read this book before Lady Midnight.

I was also close to crying when George died. It just happened so fast I didn't really have time to react strongly. Honestly, though, I really loved his character and I would have loved to see more of him, although there was that hint that he was a ghost, I really hope that comes into play at least a little bit, in the Dark Artifices.

Also, I have to briefly mention that I love Jon and Marisol together. Perfect match, I love it. Okay, I just had to mention that.

"If you could manage it," Tessa said, nodding to the sleeping figure of Lucie Herondale in her little basket by the fire, "perhaps you won't give Lucie a broadsword until she's actually able to stand? Or is that asking too much?""It seems a reasonable request," Will said, with an extravagant bow. "Anything for you, my pearl beyond price. Even withholding weaponry from my only daughter."

“You know, this porridge isn't at all bad," Simon said, digging in. George nodded enthusiastically, his mouth full.Beatriz looked sad for them, and possibly sad that boys were so stupid in general. "This isn't porridge," she told them. "These are scrambled eggs.""Oh, no," George whispered faintly, his mouth still full, his voice terribly sad. "Oh no.”

“He hated to admit it, but this was one of the things about demon amnesia that bothered him the most. What kind of seventeen-year-old guy doesn’t know whether or not he’s a virgin?”