A Darker Shade of Magic
by V. E. Schwab 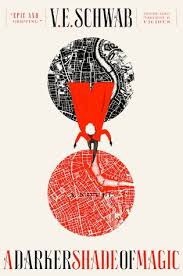 Kell is one of the last travelers--magicians with a rare, coveted ability to travel between parallel universes connected by one magical city.

There's Grey London, dirty and boring, without any magic, and with one mad King--George III. Red London, where life and magic are revered--and where Kell was raised alongside Rhy Maresh, the roguish heir to a flourishing empire. White London--a place where people fight to control magic and the magic fights back, draining the city to its very bones. And once upon a time, there was Black London. But no one speaks of that now.

Officially, Kell is the Red traveler, ambassador of the Maresh empire, carrying the monthly correspondences between the royals of each London. Unofficially, Kell is a smuggler, servicing people willing to pay for even the smallest glimpses of a world they'll never see. It's a defiant hobby with dangerous consequences, which Kell is now seeing firsthand.

Fleeing into Grey London, Kell runs into Delilah Bard, a cut-purse with lofty aspirations. She robs him, saves him from a deadly enemy, and finally forces Kell to spirit her to another world for a proper adventure.

Now perilous magic is afoot, and treachery lurks at every turn. To save all of the worlds, they'll first need to stay alive.

I gave this book 5 stars. It was exciting and creative. I was just blown away by how creative the whole book was. I loved all the characters and I was routing for them.

I almost forgot to write this review, I actually just remembered that I hadn't already written it, so here I am.

I will forever be fascinated by Kell's coat. It can turn inside out and become an entirely different coat. Not just one different coat, but several, maybe an infinite number of them and some are just harder to find then others. I can't wait to get to the next book and find out more about his coat.

Lila was a strong minded character, she wasn't the most badass, but then I don't think she really wanted or needed to be. She was just sort of at a happy medium that I really appreciated. Not all main characters have to be able to kill someone with their bare hands. She at least had to use a knife.

I was also really fascinated by all the worlds. We got some depth to three of the worlds, White London, Grey London, and Red London, but we never got to see much of Black London. There isn't much said about it other than it's basically deserted and no one goes near it. I hope that in the next book that is also touched upon.

I don't know if this is what the author was going for, but I really liked Holland and Athos. I know they're the villains, but there was something about them that I can't put my finger on. Even though they were supposedly on the same side, they still hated each other and each wanted power.

Now Astid I didn't really care for. She was just really creepy when it came to Kill and I just wanted to protect him from her. Now I know that Holland attacked Lila and that may or may not be worse than what happened with Astrid and Kill, but it wasn't actually Holland's choice, it was Athos and Astrid forcing him to do it. That's how I justify these things in my head.

What really creeped me out was that whole invasion of the body snatchers thing that was going on. The magic was taking form and stealing peoples bodies and spreading around. I was incredibly uncomfortable during these times. I'm glad that in the end it was dispelled.

Overall, this book was fantastic and I would recommend it to everyone. The plot was strong, the characters were strong, and the creativity was off the charts. This was the first V. E, Schwab book I've ever read and I was not disappointed. I'm excited to see what other adventures the author can bring me on.

“I'd rather die on an adventure than live standing still.”

“The bodies in my floor all trusted someone. Now I walk on them to tea.”