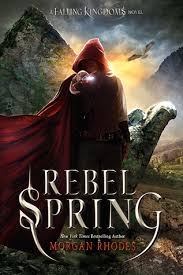 Cleo is now a prisoner in her own palace, forced to be an ambassador for Mytica as the evil King Gaius lies to her people.
Magnus stands to eventually inherit the new kingdom but is still obsessed with his feelings for his adopted sister, Lucia.
Lucia is haunted by the outcome of the breathtaking display of magic that allowed her father to capture the kingdoms.
Jonas watched at the palace gates a troop of rebels behind him, waiting for him to tell them how he plans to overtake King Gaius.

After a bloody siege, Auranos has been defeated, its young queen orphaned and dethroned. The three kingdoms—Auranos, Limeros, and Paelsia—are now unwillingly united as one country called Mytica. But the allure of ancient, dangerous magic beckons still, and with it the chance to rule not just Mytica, but the whole world over...

At the heart of the fray are four brave young people grappling for that magic and the power it promises. For Cleo, the magic would enable her to reclaim her royal seat. In Jonas's hands, it frees his nation, and in Lucia's, it fulfills the ancient prophecy of her destiny. And if the magic were Magnus's, he would finally prove his worth in the eyes of his cruel and scheming father, King Gaius, who rules Mytica with a punishing hand.

When Gaius begins to build a road into the Forbidden Mountains to physically link all of Mytica, he sparks a long-smoking fire in the hearts of the people that will forever change the face of this land. For Gaius's road is paved with blood, and its construction will have cosmic consequences.

I gave this book 5 stars. I really loved the plot, it was incredibly strong. Honestly, this book reminds me of a YA version of Game of Thrones.

I'm still not loving any of the characters in the series, I just don't really feel a connection to them. They do have potential though, I could see myself eventually liking them, I just need another book or two to really be invested in them and their lives.

Not a single character in this series is safe. The author is not afraid to kill of characters of some significance. It was shown in the first book and has been backed up in this book. Jonas himself was killed for a brief period of time after his best friend Brion was killed. Mira, Cleo's good friend was also killed without mercy. The only death I was actually happy about during this book was Aron's. Honestly, it felt like he was alive forever, and I found his death to be way too quick. I'm just glad that he finally kicked the bucket because I honestly don't know how much more of him I could take.

My favourite development of the book was in the last chapter when Lucia and Cleo made an alliance. I haven't really liked either of them, but I'm coming around. Those girls could rule the world together if they wanted.

Actually, I stand corrected my favourite development was when Nic got kissed by that one prince. I totally ship it. He was lusting after Cleo, and that was never going to happen, she was married and not at all in love with him, he was a friend for life.

I wasn't really into this book at first, but that had more to do with my mood. I did put it down for a few months, but I finally just had the urge to read it. I did and I'm glad I did because this book was definitely worth the wait.

I just could not believe that Magnus and Cleo actually ended up going through with the wedding. They actually got married. This leads to so many questions. Will they stay married? Will they fall in love? Will one of them end up killing the other? Will Magnus ever get over Lucia?

I'm just glad that this is only the second book out of a decent sized series, there is lots of room for my questions to be answered.

The one thing I don't particularly like is that I feel like all the characters are pairing off into couples. I see this happen a lot in YA and NA. All the characters just have to be part of a romance. I'm not saying that I don't like these characters together, I just feel like the author just doesn't want them to be without a significant other, so they all just sort of "Fall in love" at the same time.

Overall, the story was well written and there is so much secrecy and plot intrigue, I can't wait to get to the next book and see where the characters head from there.

“I believe we make our own destinies, every last one of us.”

“But even the coldest hate can shift into something warmer if given enough time, just as an ugly caterpillar can turn into a beautiful butterfly.”

The prince moved closer still. Before Nic could fumble for his sword to protect himself form attack, Ashur took his face between his hands and kissed him.