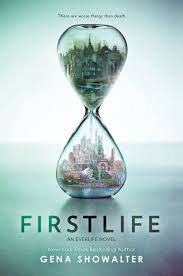 Tenley “Ten” Lockwood is an average seventeen-year-old girl…who has spent the past thirteen months locked inside the Prynne Asylum. The reason? Not her obsession with numbers, but her refusal to let her parents choose where she’ll live—after she dies.

There is an eternal truth most of the world has come to accept: Firstlife is merely a dress rehearsal, and real life begins after death.

In the Everlife, two realms are in power: Troika and Myriad, longtime enemies and deadly rivals. Both will do anything to recruit Ten, including sending their top Laborers to lure her to their side. Soon, Ten finds herself on the run, caught in a wild tug-of-war between the two realms who will do anything to win the right to her soul. Who can she trust? And what if the realm she’s drawn to isn’t home to the boy she’s falling for? She just has to stay alive long enough to make a decision…

I gave this book 3.5 stars. It was incredibly unique. The concept was what drew me in, the characters and plot were what made me stay.

The main character definitely wasn't my favourite, I didn't hate her, but I didn't really care about her all that much. She just seemed perpetually angry, which I understand considering her circumstances.
She does have her moments where she is sad, but it's mostly just anger.

Another thing is, I didn't really feel a turning point when it came to Ten and Killian's relationship, just one moment they hate each other and the next they were madly in love and I couldn't tell exactly when Ten had decided she even liked him because she was so against it at first.

I loved Killian. Even though he is a fictional character, I have a thing for cool accents. Also, the tattoos and the snark. So basically he's my type, which is why I had no issue with Ten and Killian getting together.

At first I thought this book was going to have an awful love triangle, but as I got further into the book I realized that wasn't the case. There was a sort of triangle, as in the main character had to make a choice, not about her love life, but for her actual life. She had to decide how she wanted to live her second life, and I guess her first one.

It did really upset me that the main character really couldn't trust anyone. They all wanted something from her, wanted to exploit her or destroy her. I understand why she was perpetually angry and I really hope to see some character development in the next book.

I hated her father, he was just the absolute worst, he actually made her think that he cared for her and loved her, but then he turned around put her in that asylum. Her mother wasn't much better, but in the end she showed where her loyalties truly were. Which were with Ten.

I didn't really like Archer all that much. Honestly, I felt too detached since he was such a prominent character in this book. I found myself annoyed whenever he showed up. He was all "holier than thou" when it came to Killian. Also, at the beginning of the book when I read the emails he wrote, I felt like he had a completely different voice than in the rest of the book.

I really liked the whole having to choose your fate thing. Light or dark. Which I guess is the ultimate question that everyone has. They have to be in balance or chaos will ensue. So the thought of having all the pressure put on you to decide who will come out on top is very daunting. Then there is the threat of choosing neither and instead ending up in Many Ends. Honestly, I thought that that one sounded the coolest.

I loved that the main character had her number quirk. We would get random number facts whenever the protagonist could get them in. It was amusing. It also made the cover make sense. It took me a bit too long to realize this.

“If at first you don't succeed, kill your opponent.”

“Hate is like drinking a vial of poison and expecting it to harm the other person, You’re not hurting the guy, only yourself.”

“I think I need to avoid the world today. There’s no way I can adult.”

“Without pressure, there would be no diamonds. Without tests and trials, you wouldn’t know your own strength—or weaknesses.”

“But her general nastiness triggered my inner bitch. I didn’t even know I had an inner bitch!”