The Princess Bride
By William Goldman 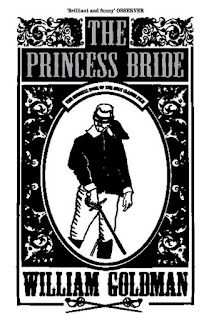 Beautiful, flaxen-haired Buttercup has fallen for Westley, the farm boy, and when he departs to make his fortune, she vows never to love another. When she hears that his ship has been captured by the Dread Pirate Roberts - who never leaves survivors - her heart is broken. But her charms draw the attention of the relentless Prince Humberdinck who wants a wife and will go to any lengths to have Buttercup. So starts a fairy tale like no other, of fencing, fighting, torture, poison, true love, hate, revenge, giants, hunters, bad men, good men, beautifulest ladies, snakes, spiders, beasts, chases, escapes, lies, truths, passions and miracles.

I gave this book 5 stars. I've read a lot of romance novels in my life, I've also watched a lot of movies where love is the central theme, so I can say with great confidence that this is without a doubt in my mind the greatest love story of all time.

A lot of my thoughts on this book stemmed from a comparison to the movie. To say that the book actually surpassed the movie is actually quite a feat in itself. I felt that the atmosphere in the book was actually different than in the movie itself. I can't really describe it.

To me, Buttercup was a lot feistier in the book. In a way, I was reminded of Ygritte from Game of Thrones. Not quite that fierce, but she was described as having a sort of wild appearance, before her transformation into a princess. Also, she has "hair like autumn". What does that even mean? because if they were talking colour wise I would think they were trying to say red, but it's already been established that her hair is blonde, so I'm a bit confused. And it isn't like it's something I can just let go, because the author uses this phrase multiple times in the book to describe her hair. If anyone knows what this means, do you mind telling me?

Now of the main differences between the book and movie is that the book itself had a lot more detail. It had an in depth background on Fezzik and Inigo. These scenes were not boring in the least, I loved having all this extra information, it made these characters seem that much more real. In the movie we do get a little bit of background on Inigo, but Fezzik for the most part is a mystery. We don't know much about him other than he's a gentle giant whom the sicilian hired to help capture the princess. It was intriguing for him to become more three dimensional.

One of the greatest subplots of the book, to me, was the fact that William Golding made up this whole other life for himself, made us think that S. Morgenstern was real, that he had this son that he was trying to get to love this book, and that his father had read this book to him when he was a child. I thought this was such a unique idea for a book that I'd never have thought of in a million years.

Westley is so sassy. You don't get to see this at first because you just see him from Buttercups point of view and he's in love with Buttercup and he pretty much only ever says "As you wish", but after he comes back as a pirate his sass is on at full force. I have to say he's probably my favourite character in this story.

The one issue I had with this book was that it had one chapter in the middle that was over 100 pages long and I have this personality issue where I have to finish the chapter before I can close the book and do anything productive. Which pretty much meant I had to sit there for years so I could finish up the chapter.


Overall, if you've seen the movie and loved it as much as I have, then you should most definitely read this book. This book has something for everyone.

“Life isn't fair, it's just fairer than death, that's all.”

“My name is Inigo Montoya, you killed my father, prepare to die!”

“Do I love you? My God, if your love were a grain of sand, mine would be a universe of beaches.”