The Hero of Ages Review

The Hero of Ages
by Brandon Sanderson 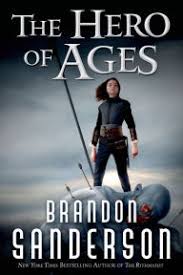 Tricked into releasing the evil spirit Ruin while attempting to close the Well of Ascension, new emperor Elend Venture and his wife, the assassin Vin, are now hard-pressed to save the world.

I gave this book 4.5 stars. This was an epic end to an epic trilogy. I couldn't have pictured it being better than it was. This book will leave you with your mouth hanging open stunned that you didn't guess how it would end.

Basically going into this book you have to know that everything you think is true from reading the rest of the series, isn't true. It will take you by surprise and not in a completely horrible way. I most definitely was not mad by how this book ended.

I actually read this book pretty quickly, I did take a bit of a break in the middle so I could read a couple other books that i just had the sudden urge to read, but when I was reading the book I flew through it really quickly. It was a very fast paced and engaging read, the plot was thick, the characters were morally grey and relatable. Brandon Sanderson has managed to surprise me with each of the books in this series while I didn't think it would be possible.

I loved the new character arc for Spook. He was this huge minor character for the first two books, no one really cared much for him. He was just sort of there to help. Well, in this book he bloomed, he became this ring leader of sorts, making plans and worming his way out of sticky situations. The book left him with an open ending so I'm pretty sure, I haven't actually checked, but I'm pretty sure he may have his own book(s) in the rest of the series, I mean, there is a book called The Lost Metal that's coming out next year. Plus, considering the ending of this one, I would think he should be a part of that.

Sazed. We constantly underestimate Sazed. Or at least I did. I just thought he was there to help out the gang, to be the rock that keeps them all grounded with his knowledge and his religions and his overall wisdom. He is in fact, the Hero of Ages and I found that to be the most surprising outcome of all. I'm really not mad about this, I think it's kind of genius.

The most heartbreaking occurrence in this book, to me was when Vin and Elend died. I know, at least they died together and are now together in their eternal life or whatever you want to call it, but I think it's sad because they were so young and still seemed to have so much life to live. I'm just thankful that they're together.

Throughout the story I knew Marsh was going to be important, he was there the whole time lurking in the background, doing shady things. We all knew something bad was going to happen with him. We just didn't know when it was going to pop up. Marsh deserved better than what fate gave him.

Overall, if you like fantasy, read the Mistborn Trilogy.

“Elend smiled. "Oh, come on. You have to admit that you're unusual, Vin. You're like some strange mixture of a noblewoman, a street urchin, and a cat. Plus, you've mangaged - in our short three years together - to kill not only my god, but my father, my brother, and my fiancée. That's kind of like a homicidal hat trick.”

“It's a mystery," Vin said, narrowing her eyes and smiling. "We Mistborn are incredibly mysterious."Elend paused." Um...I'm Mistborn too, Vin. That doesn't make any sense.""We Mistborn need not make sense," Vin said." It's beneath us. Come on-the sun's already down. We need to get moving.”

“Ham smiled. "Cett's going to be furious."Elend shrugged. "He's a paraplegic. What's he going to do? Bite us?”

“Elend started. "Vin!" Then, he smiled. "What took you so long?""I got delayed by an Inquistor and a dark god," she said. "Now hustle.”