A Great and Terrible Beauty Review

A Great and Terrible Beauty
by Libba Bray 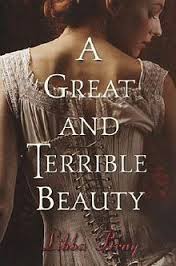 A Victorian boarding school story, a Gothic mansion mystery, a gossipy romp about a clique of girlfriends, and a dark other-worldly fantasy—jumble them all together and you have this complicated and unusual first novel.
Sixteen-year-old Gemma has had an unconventional upbringing in India, until the day she foresees her mother's death in a black, swirling vision that turns out to be true. Sent back to England, she is enrolled at Spence, a girls' academy with a mysterious burned-out East Wing. There Gemma is snubbed by powerful Felicity, beautiful Pippa, and even her own dumpy roommate Ann, until she blackmails herself and Ann into the treacherous clique. Gemma is distressed to find that she has been followed from India by Kartik, a beautiful young man who warns her to fight off the visions. Nevertheless, they continue, and one night she is led by a child-spirit to find a diary that reveals the secrets of a mystical Order. The clique soon finds a way to accompany Gemma to the other-world realms of her visions "for a bit of fun" and to taste the power they will never have as Victorian wives, but they discover that the delights of the realms are overwhelmed by a menace they cannot control. Gemma is left with the knowledge that her role as the link between worlds leaves her with a mission to seek out the "others" and rebuild the Order.

I gave this book 3.5 stars. It was a surprisingly quick and easy read. I had a good time reading it and I'm excited to continue on in the series. While it's not the best, I still thought it had a great atmosphere and characters that I could relate to.

I was most surprised that I read this book quickly because I read it pretty much right after ACOWAR and I had no hitches. No book hangover. This is a very pleasant surprise. I'm glad that this book was here to save me from the dreaded book hangover.

It was refreshing to see the main character going to this new school and not instantly becoming friends with the outcasts and shunning the popular girls. Sometimes people do befriend the popular people. Have you ever seen Mean Girls? It happens. It was nice to see that these "mean girls" had redeeming qualities, they weren't completely terrible, they were just raised a certain way. They too had their own set of problems and the main character could see this and didn't just categorize them right off the bat. She gave them a chance.

I love books set in the time of corsets and gothic boarding schools, but I sometimes forget the things that always annoy me about them. Like the misogyny. I know that's a must in pretty much any book set before the 21st century and even still now, but every time I have to read about it I get really passionate, I should say. I could totally feel for Pippa and being forced into an arranged marriage by her parents to a guy more than twice her age. The very idea makes me queasy.

Every time Gemma let's one of her friends walk all over her I just want to shake her. It's honestly not even that far off from what most teenagers would do, I know I've let myself get peer pressured in the past. I just feel like Gemma getting peer pressured will lead to some terrible things that she may not be able to take back. Especially with Felicity. She's very power hungry. I can already predict that she will be used by Circe. I like Felicity, she's not all bad, it just feels like she's going down a dark and dangerous path.

I think the author did a fantastic job of displaying the setting. It felt right, the language, the society, the way the characters were treated and how they reacted. I think it was executed very well. Sometimes when writing during different time periods, authors seem to forget when they are writing in. They give their characters corsets and topmast and then they are done with it, so it was good to see that the author put more thought into it than that.

Overall, it was a great book, I'm really looking forward to reading the next book and finding out what happens to all these characters in the future.

“Because you don't notice the light without a bit of shadow. Everything has both dark and light. You have to play with it till you get it exactly right.”

“How I'd love to get away from here and be someone else for a while in a place where no one knows or expects certain things from me.”

“Felicity ignores us. She walks out to them, an apparition in white and blue velvet, her head held high as they stare in awe at her, the goddess. I don't know yet what power feels like. But this is surely what it looks like, and I think I'm beginning to understand why those ancient women had to hide in caves. Why our parents and suitors want us to behave properly and predictably. It's not that they want to protect us; it's that they fear us.”

“I wonder how many times each day she dies a little.”


“May I suggest that you all read? And often. Believe me, it's nice to have something to talk about other than the weather and the Queen's health. Your mind is not a cage. It's a garden. And it requires cultivating.”