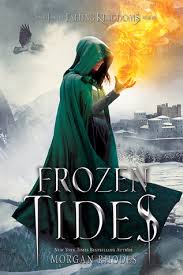 CLEO: Reeling after a bloody showdown in Limeros ending with Amara’s abduction of the water crystal, and a vacancy in the Mytican throne, Princess Cleo must cast aside her feelings and look toward her kingdom with the eyes of a Queen.

MAGNUS: With the kingdom in chaos, Princess Lucia still missing and quite possibly in danger, and a shocking realization about Cleo, the steely prince is once again torn between love and duty, leaving him wondering whether he’s strong enough to rule his people.

LUCIA: The young sorcercess has had her vengeance after the cruel death of her first and only love. Heartbroken and unable to trust anyone, she allies with the awoken Fire god, who also seeks revenge.

JONAS: After escaping death by the skin of his teeth, the defeated rebel—along with a mysterious stranger–leader reunites with Princess Cleo, only to find himself a mere pawn in a dangerous hunt for the elusive Kindred.


KING GAIUS: Abandoned by Melenia and betrayed by his own children, Gaius flees Mytica and sails to Kraeshia, where he attempts to ally with the famously brutal emperor across the Silver Sea.

I gave this book 5 stars. It was without a doubt a step up from the last book. I finally started to feel those bonds with the characters that I should have felt from the beginning.

Cleo is still not my favourite character, but she's getting better. I still like her more than Jonas and Lucia. She still isn't quite there for me yet. I'm starting to understand the Cleo and Magnus ship, I myself am loving those two together. My one problem with it is that before they admitted their feelings I feel like I had no idea how Cleo felt about Magnus. There were little hints, but in all honesty it felt a bit sudden, for Cleo at least. I was well aware of Magnus's feelings.

Magnus is probably the one who's grown on me the most. He's definitely gone through some changes and he's finally decided to change his allegiances to people less evil. I'm a bit annoyed by the way he treated Cleo for a bit considering he claimed to be in love with her, but I guess that was more of a defence mechanism.

I still don't care much for Jonas. He made me angry several times. He claimed to love Lysandra who was in love with him, but the moment she's out of sight and he sees Cleo all he can think about is cheating on her. Lysandra deserves better, aka Felix who I totally love her with.

Now Amara, I felt bad for her quite a bit, but she would just take any pity I had away whenever she would do something cowardly and awful. She had Felix almost in love with her but then she decided he had to die because she started to have feelings for him. It pissed me off so badly. I did find it really satisfying when she killed her father and brothers. Honestly, they seemed like major douchebags who treated her like shit, so I can't be upset about that one. I however, am not over the Ashur thing.

Which is why I finished this book with a smile on my face when I found out that Ashur was still alive at the end of the book. My theory is that, it was mentioned to Amara from her grandmother that Ashur went to her physician to get a medicine, and in the past book Amara was told that she was brought back from the dead with a potion. So I'm thinking maybe Ashur had a potion of his own that brought him back. Either way I'm happy because Ashur is my favourite character and him and Nic are my OTP of the series.

Lucia is just so naive and annoying. I know Cleo is a bit naive and annoying, but not to the extent of Lucis. My favourite part of the entire book was probably when Timotheous had the dream conversation with her and just continuously roasted her. Most amazing thing that has ever happened. I haven't seen much of Timotheous, but he's a new favourite character.

What this series does is never disappointing me plot wise. The author always has something up her sleeve just to mess things up just a little bit more. This is what's going to make it all the more satisfying when they solve the conflicts. The author is also really good at writing slimy cowardly characters that I absolutely hate, and then promptly killing them. Like Arin, and hopefully Kurtis.

Overall, I understand why so many people love this series, honestly, I'm getting there myself. This book probably had the most satisfying ending yet. I'm pretty excited to get to the next instalment.

“She was his princess. No. She was his goddess. With her golden skin and golden hair. She was his light. His life. His everything.He loved her more than anything else in this world.”

“But you should remember that charm opens far more doors than harsh words do.” “And a sharp ax will open every door.”

“I love you, Cleo," he said, the words finally coming to him, with no effort at all because of how true they were. "I love you so much it hurts."Her eyes widened. "What did you just say?"Magnus almost laughed. "I think you heard me right.”


“You broke it. Congratulations. You’ve just given me my sixth broken nose, and now I’m going to kill you.”