The School for Good and Evil Book Talk

The School for Good and Evil
by Soman Chainani 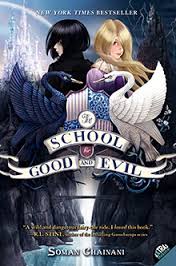 The first kidnappings happened two hundred years before. Some years it was two boys taken, some years two girls, sometimes one of each. But if at first the choices seemed random, soon the pattern became clear. One was always beautiful and good, the child every parent wanted as their own. The other was homely and odd, an outcast from birth. An opposing pair, plucked from youth and spirited away.

This year, best friends Sophie and Agatha are about to discover where all the lost children go: the fabled School for Good & Evil, where ordinary boys and girls are trained to be fairy tale heroes and villains. As the most beautiful girl in Gavaldon, Sophie has dreamed of being kidnapped into an enchanted world her whole life. With her pink dresses, glass slippers, and devotion to good deeds, she knows she’ll earn top marks at the School for Good and graduate a storybook princess. Meanwhile Agatha, with her shapeless black frocks, wicked pet cat, and dislike of nearly everyone, seems a natural fit for the School for Evil.

But when the two girls are swept into the Endless Woods, they find their fortunes reversed—Sophie’s dumped in the School for Evil to take Uglification, Death Curses, and Henchmen Training, while Agatha finds herself in the School For Good, thrust amongst handsome princes and fair maidens for classes in Princess Etiquette and Animal Communication.. But what if the mistake is actually the first clue to discovering who Sophie and Agatha really are…?

The School for Good & Evil is an epic journey into a dazzling new world, where the only way out of a fairy tale is to live through one.

I gave this book 5 stars. I thought it was wonderfully creative and different and I loved every page I read. I read it in one day, I became so obsessed with it. I plan to get my hands on the rest of the series as soon as I possibly can.

I have to start off with, I thought the author was a lady at first, I don't know why, but that's what I thought at first, but for some reason I was flipping through the back of the book and discovered that the author was not a woman. I was very surprised to say the least. I also have to congratulate the author on writing a book about girls so well. I thought it was fantastic.

What I never seemed to find was how old the characters are in this book. I know that they have to be at least 12 years old, but I really don't know specifically how old they are. I feel like they have to be older than 12 because they feel like they need to have their princess and fall in love right now and if they're 12 then I think that's a bit weird, but at the same time they still seem pretty immature so I don't think they are in their late teens. I'm putting them between 14 and 16. That is my guestimate.

I loved the story in general. Flipping stereotypes on their heads. The girl who everyone thinks is vile and terrible ends up as a princess and the girl who is lovely and beautiful ends up being a villain. Now there were some things that bothered me, little things such as the way villains had to be, they had to be ugly and I just don't think that's quite accurate. I mean evil queen from Snow White was gorgeous. Anyway, that was the only thing that really bothered me about the book.

The most mind boggling part of the book, for me, was when Sofie and the Headmaster have the meeting and it's revealed that he's actually really young and most importantly evil. I thought he was the good one, which I guess was what the author was going for. So good for him. I was also really surprised when he said that they were soul mates or whatever. I had to put the book down for a moment, because she is like what, 14? and he is over 200 years old. Now that's what I call robbing the cradle.

I had a love hate relationship with Sofie. At times she really seemed to care about what happened to Agatha, but others, she was just so terrible. I honestly, never knew what to expect from her. She was just so unpredictable, it was always an uncertainty of whether she would double cross Agatha or do right by her.

I really liked Agatha, she went through some major character development. She started out living in a cemetery, scaring everyone away, then she went to this school where she didn't really fit in and she was just as equally terrible there, but then she slowly learned that she was meant to be there. She learned to love herself the way she was and the people around her started liking her because she liked herself.

Now the book has ended on a huge cliffhanger and I'm left with a billion questions, like, Are they stuck in the real world now? did the people form the School of Good become attractive again? Are the former members of the School of Evil permanently good now? Is it just going to be the School of Good now? I need to know.


“She had always found villains more exciting than heroes. They had ambition, passion. They made the stories happen. Villains didn't fear death. No, they wrapped themselves in death like suits of armor! As she inhaled the school's graveyard smell, Agatha felt her blood rush. For like all villains, death didn't scare her. It made her feel alive.”

“You’re not evil Sophie," Agatha whispered, touching her decayed cheek. "You’re human." Sophie smiled weakly. “Only if I have you.”

“- You gave me a dead frog for my birthday!- To remind you we all die and end up rotting underground eaten by maggots so we should enjoy our birthdays while we have them. I found it thoughtful.”