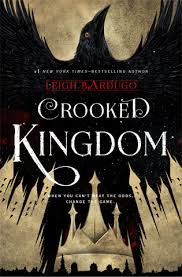 Kaz Brekker and his crew have just pulled off a heist so daring even they didn't think they'd survive. But instead of divvying up a fat reward, they're right back to fighting for their lives. Double-crossed and left crippled by the kidnapping of a valuable team member, the crew is low on resources, allies, and hope. As powerful forces from around the world descend on Ketterdam to root out the secrets of the dangerous drug known as jurda parem, old rivals and new enemies emerge to challenge Kaz's cunning and test the team's fragile loyalties. A war will be waged on the city's dark and twisting streets―a battle for revenge and redemption that will decide the fate of magic in the Grisha world.

I gave this book 5 stars. This was completely devastating near the end of the book. I was not expecting what happened. It was completely blind sided me.

So I spent two whole books rooting for my ships, and what do you know, Mattias has to just go and die and stay dead. I cried like a baby. I wanted him and Nina to get together so badly, maybe the most out of all the couples in this book. I really thought they were going to make it.

Other than this devastating blow, the book came to a beautiful ending. I really enjoyed it. The characters seemed to face their fears and works through them, or are on a  steady course to resolve their personal conflicts.

It made me feel a bit better to know that after all this bad stuff had gone down, that at least Kaz and Inej were going to still be doing things together. Hopefully. Maybe they will even get together, have some children, maybe even get married. It would be so incredibly cute. my imagination can't handle it.

It brought me great joy to see Kaz run Pekka Rollins right out of town. He scared him so badly, even beat him at his own game. The the whole gang also got a win against Van Eck. I'm glad to see that happening to him after all the misery he has caused those around him, like his son and his wife. Also, the fact that he took a wife about the same age as his son. Ridiculous.

There were some new characters that were introduced in this book, most notably the White Blade, ro whatever her name is. She appeared during a vital part of the gangs plot against Van Eck. At first she seemed to beat Inej in a fight, but that wasn't exactly fair because Inej was just rescued from the clutches of Van Eck a few days before this. So my personal favourite part of the book was when Inej and the White Blade met again, they had a final showdown and Inej being the badass that she is, totally wiped the floor with her.

Inej was the real map of this novel. She survived the torture that Van Eck put her through, she beat the shit out of the White blade, and then at the very end she threatened Pekka Rollins and finally drove him to get as far away as possible and stay away. Bonus, she got her family back. She earned that.

I loved Nina even more in this book than I did in the first book. She was just so sassy and flirty. She teased Mattias so much and it sometimes got heated. I also just loved the fact that she was willing to do anything for her friends. She would say some hilarious shit sometimes and make plans to kill people. In a way she reminded me of Rose Hathaway from the Vampire Academy, and if you didn't know, Rose happens to be one of my favourite characters of all time. I love her. And by default i love Nina, and I just feel so bad for her because of Mattias.

Now, Wylan and Jesper, their relationship felt a bit, less than the other two. The book didn't really have much focus on their relationship. The most focus it had was when Jesper kissed Kuwei because he thought he was Wylan. And Wylan walked in on this and got super upset. I feel like maybe after the book ends they get together, but I'm honestly not all that sure about them.

“Fear is a phoenix. You can watch it burn a thousand times and still it will return.”

“Have any of you wondered what I did with all the cash Pekka Rollins gave us?""Guns?" asked Jesper."Ships?" queried Inej."Bombs?" suggested Wylan. "Political bribes?" offered Nina. They all looked at Matthias. "This is where you tell us how awful we are," she whispered.”

“She smiled then, her cheeks red, her cheeks scattered with some kind of dust. It was a smile he thought he might die to earn again.”

“Has anyone noticed this whole city is looking for us, mad at us, or wants to kill us?""So?" said Kaz."Well, usually it's just half the city.”

“Meeting you was a disaster.”She raised a brow. “Thank you.”Djel, he was terrible at this. He stumbled on, trying to make her understand. “But I am grateful for that disaster. I needed a catastrophe to shake me from the life I knew. You were an earthquake, a landslide.”“I,” she said, planting a hand on her hip, “am a delicate flower.”“You aren’t a flower, you’re every blossom in the wood blooming at once. You are a tidal wave. You’re a stampede. You are overwhelming.”

“Crows remember human faces. They remember the people who feed them, who are kind to them. And the people who wrong them too. They don’t forget. They tell each other who to look after and who to watch out for.”