The Raven King
by Maggie Stiefvater 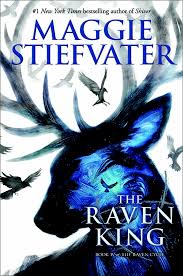 
Nothing living is safe. Nothing dead is to be trusted.

Now the endgame has begun. Dreams and nightmares are converging. Love and loss are inseparable. And the quest refuses to be pinned to a path.

I gave this book 5 stars. I couldn't quite put my finger on why the Mercy Falls Wolves series and this series felt so different. Now I feel like I've discovered the secrets to the universe because I realized that this series felt more like a dream. Go read the series and tell me it doesn't feel like it's a dream in a book. You're lying if you tell me this.

Okay in an earlier review of I think it was Dream Thieves, I had this theory that Glendower was Blue's father, I was wrong, but I was still pretty close to the mark. Blue's father is a man named Artemis and he was Glendower's advisor or something like that. He was also the one who put all the sleepers to sleep. He is also a tree shifter. Does this make him some sort of tree sprite? I have no clue. I just know that Blue is also a tree. I find this very amusing.

What I found ironic about this whole series, was all the characters have seem supernatural powers. Ronan is the Greywaren, Adam has some weird sort of sorcery, Blue is a tree, Noah's a ghost, and basically everyone else is a psychic, but then there is Gansey. At the beginning of the series you kind of assume, or at least I did, that he would have some sort of really cool powers of some sort. He never has magic, but I guess his personality is pretty magical.

I was actually very surprised when Glendower turned out to be dead. I just sort of assumed that since they were all working so hard to try and find him that he would be there and they would get their wish and it would be wicked cool and magical. I never even thought of the possibility that he could be dead.

I was so happy because both of my ships finally got together in this book. Ronan and Adam made out. Twice. I'm so excited for the series about Ronan because there is (hopefully) going to be many scenes with them together. I actually freaked out in the middle of class when they kissed for the first time. It was beautiful.

Then when Gansey and Blue were together. They were so head over heels for each other, no matter how hard they tried they were totally drawn to each other. It was absolutely adorable. It was this huge build up and when it finally came to the end where they had to sacrifice someone to kill the third sleeper aka the demon. I was so emotional because I wasn't sure of Maggie was going to bring him back to life. Authors have been known to do cruel things like kill off love interests and main characters. Thankfully, they saved Gansey and there is going to be a post graduation road trip in the Camaro without an engine.

I love love love the friendship between Blue and Ronan. There interactions are so funny. They bring light into my life. Best thing about this series by far. That moment when Ronan makes the comment about how the stitches on her face are badass. Precious.

"Ronan slammed his locker. he had not put anything in it and had no reason to open or close it, but he liked the satisfying bang of metal down the hall, the way it drowned out the announcements. He did it again for good measure."

“To think you could have been dreaming the cure for cancer," Blue said. "Look, Sargent," Ronan retorted, "I was gonna dream you some eye cream last night since clearly modern medicine's doing jack shit for you, but I nearly had my ass handed to me by a death snake from the fourth circle of dream hell, so you're welcome."Blue was appropriately touched. "Ah, thanks, man.""No problem, bro.”

“No homework. I got suspended,” Blue replied.“Get the fuck out,” Ronan said, but with admiration. “Sargent, you asshole.”Blue reluctantly allowed him to bump fists with her as Gansey eyed her meaningfully in the rearview mirror.Adam swivelled the other way in his seat – to the right, instead of to the left, so that he was peering around the far side of the headrest. It made him look as if he were hiding, but Blue knew it was just because it turned his hearing ear instead of his deaf ear towards them. “For what?”“Emptying another student’s backpack over his car. I don’t really want to talk about it.”“I do,” Ronan said.“Well, I don’t. I’m not proud of it.”Ronan patted her leg. “I’ll be proud for you.”

“Making Ronan Lynch smile felt as charged as making a bargain with Cabeswater. These were not forces to play with.”

“Where the hell is Ronan?" Gansey asked, echoing the words that thousands of humans had uttered since mankind developed speech.”