The Kiss of Deception Book Talk

The Kiss of Deception
by Mary E. Pearson 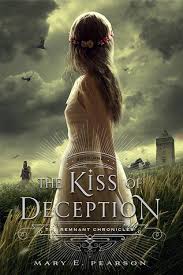 A princess must find her place in a reborn world.

She flees on her wedding day.

She steals ancient documents from the Chancellor's secret collection.

She is pursued by bounty hunters sent by her own father.

She is Princess Lia, seventeen, First Daughter of the House of Morrighan.

The Kingdom of Morrighan is steeped in tradition and the stories of a bygone world, but some traditions Lia can't abide. Like having to marry someone she's never met to secure a political alliance.

Fed up and ready for a new life, Lia flees to a distant village on the morning of her wedding. She settles in among the common folk, intrigued when two mysterious and handsome strangers arrive—and unaware that one is the jilted prince and the other an assassin sent to kill her. Deceptions swirl and Lia finds herself on the brink of unlocking perilous secrets—secrets that may unravel her world—even as she feels herself falling in love.

I gave this book 5 stars. I have been having a very good reading month. Lots and lots of 5 star reads. This one is the cherry on top of the metaphorical cake.

So in the story, you get there points of views. The Princess, the Prince, and the Assassin. Now you don't know which one is which. So the two men are named Rafe and Kaden. Now I thought I knew which one was the assassin and which one was the Price. I thought it was totally and completely obvious. But Mary E. Pearson, played a trick on me and I was just so wrong. Now usually I would just say which was which because I personally love spoilers, but I think this one is better left unsaid. You can comment down bellow which one you thought was the prince and which one was the assassin if you want. I wanna see how many people got it right.

After reading this book, I can conclude that I like Rafe better. He's really moody and not what I expected him to be like. Him and Lia had such fantastic chemistry throughout the novel and I'm rooting for them to make it in the end.

Now Kaden, I didn't have an instantaneous connection with him, I don't know, he just seemed so full of ulterior motive and he just wasn't as dynamic as Rafe was. I mean, I do still like him, I just don't want him and Lia to get together.

I liked the fact that Lia actually had reasons for running away. She genuinely wanted to be a normal person with a normal life. She did her very best to fit in and held her own when working. She wasn't just a spoiled brat who thought commoner life would be easier than being a princess just because she didn't want to marry someone not of her choosing. Lia had depth. I'm excited to see which direction her character goes in in the next two books.

It was strongly hinted at, or more precisely, stated, that she would have some huge quest to come. It was in the book, there was that one poem about her being a saviour.

I also want to know more about her mother. it seems like something has been happening with her mother that hasn't really been discussed. It's just been eluded to.

I shed a tear or two when Lia's brother Walther died. It broke my heart when Greta and the baby died. It was just so sad, Greta was only 19 years old. That's way too young. When Walther died, though, it was just tragic. Lia knew it was going to happen, she could see the army defending upon their camp, and yet she could do nothing to stop the massacre from happening and was held back by Kaden. Then she spent hours making sure that every one of those soldiers got a proper burial. Even preformed the special ceremony for each of them.

What makes me nervous, is whenever the main character lies to another character about something significant. It just makes me so nervous because I know that it's going to come out eventually in an awful way. This is how I felt when Lia lied to Pauline, saying that Mikael was dead. You should not lie to a pregnant lady like that, it's cruel, most certainly if she finds out the truth. Personally, I want what Walther said about Mikael having tons of lady friends to be false and misguided. I want Pauline and Michael to be together, I want him to love her and their child and have a happy ending, because I think Pauline deserves that. From this first book I have decided that I really do like her, she is an amazing friend.

I was so relieved when Rafe caught up in the end and I just feel so much better about the whole situation now that he is there with her. I want them to be together forever. They are so cute.


“It can take years to mold a dream. It takes only a fraction of a second for it to be shattered.”

“Maybe there were a hundred different ways to fall in love.”

“Sometimes the enemy is just one person who will bring down a kingdom.”