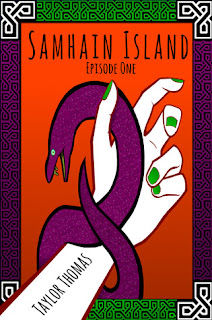 Samhain Island is riddled with conspiracy theories, urban legends, and various monsters. This is the island Tremaine Boppel moved to with her family. She’s happy to start over in a new town, with new people and a new school. But what’s in that tower by her apartment? Why will the tenant never come out of it? Why does she keep getting notes out of thin air? She’s about to learn that there’s more to the island besides shadows and silly stories.

I gave this book 4 stars. It's avery promising entrance into this new world. We were introduced to all these new characters and plots, it was well enough explained that you never forgot who each  person was. It was overall, a very satisfying read and I'm excited to continue on in this serial novel series.

Now I don't have a lot to say about this book since it was so small, but I'll try my best to touch on the topics as best as I can right now.

I originally thought that the characters where going to be older than they were, they ended up being only 13 years old. They felt a bit older than this, but the way they acted sometimes really conveyed that they were in fact 13 years old.

What I questioned about the book, was why did Sky's parental guardian let him live alone in an apartment bought by an average family? Did he not think that they would eventually get curious and want to find out who lived there? Seemed like a huge risk to me, especially since there are so many hunters around.

I don't really agree with the whole wanting immortality thing, maybe if I was in my twenties, but being frozen at 13 seems like my own personal hell. 13 is when you first enter teenager years, the years that suck. You're hormonal and pimply and absolutely moody. It's awful I hated being 13, it's a bit hard for me to believe that anyone would want to be that age forever.

But you know, maybe the whole immortality thing works differently in this world. We didn't get into it all that much in this book, but we probably will in the next. Maybe the way immortality will work is you age until you are at the prime of your physical abilities. So she will age, just at some point she will stop physically aging. I hope it's something like that because I really can't get over the whole being frozen at 13 thing.

"Checking in the closet? Such a cliche."


"If I were a piece of celery, trust me, I would be petrified."


"YOU STILL DOWN FOR IMMORTALITY? BECAUSE I AM. MEET ME BEHIND THE SCHOOL AT 4. NO HUNTERS THIS TIME."