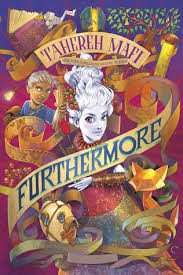 There are only three things that matter to twelve-year-old Alice Alexis Queensmeadow: Mother, who wouldn't miss her; magic and color, which seem to elude her; and Father, who always loved her. The day Father disappears from Ferenwood he takes nothing but a ruler with him. But it's been almost three years since then, and Alice is determined to find him. She loves her father even more than she loves adventure, and she's about to embark on one to find the other.

But bringing Father home is no small matter. In order to find him she'll have to travel through the mythical, dangerous land of Furthermore, where down can be up, paper is alive, and left can be both right and very, very wrong. Her only companion is a boy named Oliver whose own magical ability is based in lies and deceit--and with a liar by her side in a land where nothing is as it seems, it will take all of Alice's wits (and every limb she's got) to find Father and return home to Ferenwood in one piece. On her quest to find Father, Alice must first find herself--and hold fast to the magic of love in the face of loss.

I gave this book 4 star. Tahereh's writing has remained as beautiful and poetic as it was in her previous novels, and I was incredibly happy about this. Overall, it was a solid read. I really enjoyed it. It was so wonderfully strange, it reminded me of the preteen "random" stage. It was fun and unpredictable. I would suggest reading this.

To start off, the main character was so very irrational. She was very quick to jump to conclusions, but she was also very chipper and afraid to be different. Tahereh did an amazing job at accurately portraying a 12 year old girl. I was convinced that she was still a kid, she never seemed older than she was.

The very idea of the story was very strange, but creative. It was written very well in typical Tahereh Mafi fashion. Meaning, the writing style was on point and almost poetic. It was glaring off the pages at me, I could picture all of the scenarios and all the colours and landscapes. They were right there in my mind, I could see Furthermore.

I'm a very emotional person. I cried during a commercial the other day. When we got to the end of the book and Alice is reunited with her mother after the journey and Alice is terrified that her mother will be mad at her and is going to hate her. I really felt for her and I had tears in my eyes when Alice's mother started crying because she had been so worried about her when she had left. All of her past treatment of Alice had just been forgotten because you could tell that her mother really did love her very much.

The end seemed a bit abrupt. There were only about 20-30 pages left in the book when they "stumble" across Alice's father and they just got out of everything unscathed. I thought Alice's father had been arrested for wasting too much time. And even if what he had been doing was his sentence, then why was he just allowed to wander out of Furthermore, no questions asked.

I also have to wonder, Alice broke her ruler thing because it was there to help her in a dire situation and Oliver later commented that she was probably going to get arrested because she was never actually supposed to use it. That was never resolved. There better be a second book because I feel like there is a lot of stuff that just hasn't happened yet.

Also, we need to go along with Alice during her task after her surrendering. She has this unique gift and I'm curious to see how she can use this to benefit the people of Ferenwood.

I'm also incredibly glad that this wasn't somehow made into a romance. I feel like a lot of the time the end all be all of books is the love story. Now while I love a good romance, I don't think it should be in every book. It takes away from the plot. I'm glad that Alice and Oliver remained friends. I could totally see them getting together in the future, but I think they're way too young for that. I sound so old when I say that.

I was really on the fence about the paper fox, at times it seemed cool. It seemed like it generally cared about the children's well being and wanted them to get out of there before bad stuff happened, but at the same time, it ripped off Alice's arm and went on a huge rampage later on, so... Up in the air about that.


“The morning arrived the way Alice imagined a whisper would: in tendrils of gray and threads of gold, quietly, quietly. The sky was illuminated with great care and deliberation, and she leaned back to watch it bloom.”


“Red was ruby, green was fluorescent, yellow was simply incandescent. Color was life. Color was everything.Color, you see, was the universal sign of magic.”


“Alice was an odd girl, even for Ferenwood, where the sun occasionally rained and the colors were brighter than usual and magic was as common as a frowning parent.”


“Mother didn’t care for the oddness of Alice; she wasn’t a parent who was predisposed to liking her children. She didn’t find their quirks endearing.”