The Outsiders
by S. E. Hinton 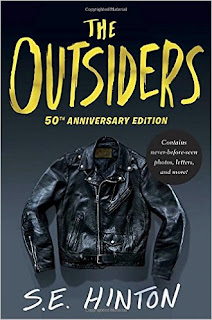 In Ponyboy's world, there are two types of people. There are the Socs, the rich society kids who get away with anything. Then there are the greasers, like Ponyboy, who aren't so lucky. Ponyboy has a few things he can count on: his older brothers, his friends, and trouble with the Socs, whose idea of a good time is beating up greasers. At least he knows what to expect-until the night things go too far.

I gave this book 5 stars. I read this book many years ago and it still remains one of my favorite books ever. It's one of those books that stays with you always, you can't help but compare your own life to the events in this book.

Personally, I was one of those people that cried for Dally. Most people either cried for Johnny or didn't cry at all, and while I can understand crying for Johnny, I don't really understand not crying at all. Even though I loved Johnny and was completely devastated by his death especially since he was so young, I couldn't help but morn Dally. Dally had a pretty shitty life, he never had anyone who believed in him and learned from a young age that he had to look out for himself because no one else would.

I felt like I related most with Dally, he was just a troublemaker from the start who didn't care about how other people viewed him. Dally is how I view myself, although that's probably not even close to how I actually am. Dally did have his defining moments though. He cared endlessly for Johnny without reason, he just did it because he must have seen something in Johnny that was worth protecting. There was also the scene with the fire. He could have just left those kids to burn to death, and although he wasn't exactly happy to be risking his neck, he did it anyway because it was the right thing to do. Dally likes to pretend that's he's a heartless badass, but there is a heart in there somewhere.

My sister read this book before me and she kept trying to get me to read it, but I kept putting it off, I didn't care about what it said. I was more into werewolves and spies. I had little interest in general fiction. Eighth grade came around and we had to read this book for school. I wasn't exactly happy about it, but the first day we had to read the first two chapters for homework. I read those first two chapters and then I read two more, and two more until I was finished the book and had possibly the worst book hangover of my life. This book changed my outlook on people.

At the time of reading this, I honestly couldn't have cared less for Ponyboy. But as I spend more time thinking about it, I can definitely see some of myself in this book. This book is pretty much Ponyboy's coming of age tale. Before the story, he still has a lot of innocence about him, but by the end, he has completely shed that. I tend to find any coming of age story to be relatable because I think that's the one type of story you can't really get wrong. It's about growing up, most people have to do it. It's one of the most difficult times in a persons life and I couldn't help but find Ponyboy's story to be one of those stories I could feel on a spiritual level.

This book surprised me so much because it was written by a fifteen-year-old girl that never expected her story to get published and then it went on to be a modern classic that they teach in high schools. Teenagers can do some pretty amazing things and have a greater grasp on the world than adults want to give them credit for.

One of the greatest books of all time. Would highly recommend giving it a read.
Posted by Jessie at 21:47