The Last Ever After Review

The Last Ever After
by Soman Chainani 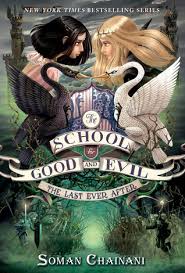 In the epic next chapter of Soman Chainani’s New York Times bestselling series, The School for Good and Evil, everything old is new again as Sophie and Agatha fight the past as well as the present to find the perfect end to their story.

As A World Without Princes closed, the end was written and former best friends Sophie and Agatha went their separate ways. Agatha was whisked back to Gavaldon with Tedros and Sophie stayed behind with the beautiful young School Master.

But as they settle into their new lives, their story begs to be re-written, and this time, theirs isn’t the only one. With the girls apart, Evil has taken over and the villains of the past have come back to change their tales and turn the world of Good and Evil upside down.


Readers around the world are eagerly awaiting the third book in The School for Good and Evil series, The Last Ever After. This extraordinary new journey delivers more action, adventure, laughter, romance and fairy tale twists and turns than you could ever dream of!

I gave this book 4 stars. I definitely didn't love it as much as I loved the first, but it was still better than the second.

I had such a hard time trying to sympathize with Sophie. I liked her, she was a ridiculous and hilarious character, but she was just so selfish. She just had to keep trying to take everything that Agatha had. The worst part was that Agatha was totally letting her. I did appreciate her character development though, she finally realized she didn't need a boyfriend to validate herself.

I like the thought of her and Hort more and more by the minute. Hort has become his own person and Sophie has finally become who she's supposed to be. They'll work it out, hopefully, in the next book.

I felt like a lot of the characters in this book didn't act like people. That was a reoccurring thought I had while reading it. The characters were all either givers or takers, there weren't really many in the middle. For example, Agatha would just take every bad thing that happened to her, basically saying it was her own fault. She never got angry at Sophie for trying to steal her boyfriend. I'm pretty sure if I had a boyfriend that my best friend was trying to steal I would be pretty angry with them. It just didn't seem realistic. I also don't think it's realistic to try and talk your best friend into letting you steal her boyfriend, like Sophie did.

I loved the plot of this book. Each of these books has brought out a completely new set of differences, first being good and evil, second being boys and girls, and finally in this book, new and old. I loved the fact that it didn't feel like the author was just reusing old plots, trust me, that gets really old really fast.

It was everything I expected from a middle grade book. The writing was easy to follow, I was never confused by anything that was happening. I was endlessly entertained by the stuff these characters would do, they were hilarious and lovable. One of my favourite things about it is the imagination; it's endless.

I love a good plot twist, and believe me, this was one of the best. Agatha and Sophie twins? I was under the impression that they were just really close! But this just makes so much more sense now, there was so much secrecy going on, I didn't know what to think.

The one complaint I have about this book is that it's so small but thick that when I was reading it I cracked the spin without meaning to. It was heartbreaking. I didn't even try to crack the spine.

Once again, I didn't like this book as much as the first, but considering this is a book aimed at a children demographic, I don't think I should judge it so harshly.


“To find a happy ending with someone else, first you have to find it alone.”

“It wasn't goodbye forever. Only goodbye for now. And if ever the distance was too much to bear, she would just look inside her heart, for Agatha was already there.”

“Rat #1 got you through the gates, didn't it?" said Anadil, stroking the still-pooped pet in her pocket. "Rat #2 gets you to the tower.""And Rat #3 negotiates world peace?”


“Even fairy tales have limits," said Sophie. "Three people can't have an Ever After. Not without me being alone.”