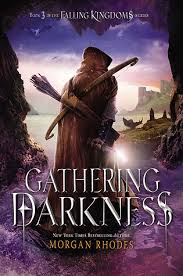 Prince Magnus has just witnessed torture, death, and miracles during the bloody confrontation that decimated the rebel forces. Now he must choose between family and justice as his father, the cruel King Gaius, sets out to conquer all of Mytica. All Gaius needs now are the Kindred - the four elemental crystals that give godlike powers to their owner. But the King of Blood is not the only one hunting for this ancient, storied magic...

• THE KRAESHIANS join the hunt. Ashur and Amara, the royal siblings from the wealthy kingdom across the Silver Sea, charm and manipulate their way to the Kindred, proving to be more ruthless than perhaps even the King of Blood himself.

• THE REBELS forge ahead. Princess Cleo and vengeful Jonas lead them, slaying with sweetness, skill, and a secret that can control Lucia's overpowering magic - all so they can use the Kindred to win back their fallen kingdoms.

• THE WATCHERS follow Melenia out of the Sanctuary. They ally in the flesh with King Gaius, who vows to use Lucia's powers to unveil the Kindred.

The only certainty in the dark times is that whoever finds the magic first will control the fate of Mytica... but fate can be fickle when magic is involved.

I gave this book 4.5 stars. I really enjoyed this book. As a series it's getting better and better. Still room for improvement, but It was not bad, not bad at all.

Some of the characters, in my opinion, were still kind of annoying. I seemed to have forgotten how much they annoy me since the last book. I'm hoping some character development happens and they aren't as annoying, but I can only hope.

The plot has thickened so much in this book. Whatever has happened in the last two books was only scratching the surface, man, this book was probably only scratching the surface, but it still delved deeper. There are three opposing forces that face these teens, it's pretty daunting. What's gonna happen to them? How could they possibly defeat everyone who wants to steamroll them. Well, I have the next book so I guess I'll be finding out for myself soon enough.

I've developed a new appreciation for Nic. He didn't annoy me at all, he just wants to stand by what he believes it right, and he'll stand by his friends no matter what they choose to do. He was just so loyal to Cleo, he was kind and brave when he needed to be. He had a strong moral compass. Honestly, I need a Nic in my life.

The one thing that never fails to impress me is the authors ability to write all these amazing villains. Whether they're magical or just everyday people that we hate. I hate pretty much all of the villains. Most of all Amara. Every time someone fell for something that Amara did or said I was just so annoyed because to me, she was pretty transparent.  The worst was when Magnus slept with her. I didn't know how to feel about it, cause Magnus and Cleo were married in name only, they didn't actually even like each other, but it still felt like he was cheating on her which was driving me crazy.

The king hasn't really been a front runner for my hatred in this book, that was more of a book one and book two thing. I have no doubt he'll manage to piss me off really badly in the next book.

I didn't exactly like Melenia, but I like her story arc. I'm really fascinated by her "love" interest. The god of fire, that's a pretty badass title to hold.

I was so mad at Ashur, he was being pretty aloof when it came to Nic, it honestly felt like he was playing him. I thought I was right there for a moment, but it turns out Ashur is just a really spectacular actor. I was devastated by his death, him and Nic were finally on the same page and I wanted them to be together so bad! Nic deserves to be happy. I hope he does find that, although, I will love Ashur forever.

In conclusion, a really good book that any fantasy lover should definitely read, no matter how annoying characters are. We're here for the plot.

“In the shadow my father has cast over my entire life, you are the only light I can see anymore. And, whatever the cost, I refuse to let that light be extinguished”

“Magnus had come to a horrible realization. One that he knew would cause him nothing but pain and suffering from that day forward.But there was no changing the truth of it.He had fallen in love with her.”

“You don't cry when someone pushes you down. You get up. You get up and you fight back. And pretty soon nobody's going to shove you anymore because they'll see it's not worth it.”

“Hatred is like fire. It burns the one who harnesses it. It's also extremely hard to see more helpful truths through its flames.”

“Her cerulean eyes widened. "You dream about me?"His gaze snapped back to hers."Nightmares only”