By Your Side Review

By Your Side
by Katie West 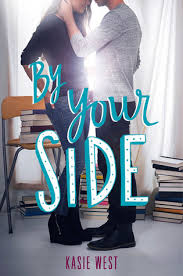 
In this irresistible story, Kasie West explores the timeless question of what to do when you fall for the person you least expect. Witty and romantic, this paperback original from a fan favorite is perfect for fans of Stephanie Perkins and Morgan Matson.

When Autumn Collins finds herself accidentally locked in the library for an entire weekend, she doesn’t think things could get any worse. But that’s before she realizes that Dax Miller is locked in with her. Autumn doesn’t know much about Dax except that he’s trouble. Between the rumors about the fight he was in (and that brief stint in juvie that followed it) and his reputation as a loner, he’s not exactly the ideal person to be stuck with. Still, she just keeps reminding herself that it is only a matter of time before Jeff, her almost-boyfriend, realizes he left her in the library and comes to rescue her.

Only he doesn’t come. No one does.

Instead it becomes clear that Autumn is going to have to spend the next couple of days living off vending-machine food and making conversation with a boy who clearly wants nothing to do with her. Except there is more to Dax than meets the eye. As he and Autumn first grudgingly, and then not so grudgingly, open up to each other, Autumn is struck by their surprising connection. But can their feelings for each other survive once the weekend is over and Autumn’s old life, and old love interest, threaten to pull her from Dax’s side?

I gave this book 4 stars. It was cute and charming, and didn't have as much drama as I was expecting. It was a fun, fluffy read. This is the first book I've read by this author and I'm excited to read more fluff.

I originally bought this book because I needed something that was eleven dollars for my Indigo order to have free shipping, so after looking through a billion books that I didn't want, I stumbled across this. It was up for preordering and it looked really cute. I realized, I don't read enough contemporary. So I bought this book. I just got to it after having it for around a month.

I picked this book up last night because I had just finished Norse Mythology and had to start a new book. I decided, why not just read a couple pages now? A couple pages turned into several chapters before I finally put it down. Then this morning I could not put it down, I read this book whenever I had a spare moment, which I had a lot of. This was the type of book that, if I had had the time, I would have just read it in one sitting.

I loved the main character. She was just a very nice happy person even when she wasn't exactly happy. She didn't let her anxiety keep her from doing things, but I was glad to see that she did learn what her limits were during this book. I could definitely relate to her situation, having anxiety myself.

Dax was a little cutie. He was a bit dark and brooding, but he wasn't a stereotype, he did have more of a personality than just the broody mysterious guy. He just had a really crappy upbringing. That would make anyone moody. I loved the moments when he was playful, I just felt like I was learning this whole other side to him. Him and Autumn are good together.

The whole reason I read this book in the first place, was because of the plot. Two teenagers getting locked in a library together for a whole weekend? That sounds like fun. Imagine the mischief. It definitely lived up to what I expected. They grew closer, they played games, they messed around. Beautiful.

While I generally did like the book, I had a few problems with it. Small, but still problems. First of all, why did they have such good tv? Considering some of the things they were watching I would say they had cable. What kind of library has cable tv? Second, whenever Autumn would have a memory of Jeff or Lisa while trapped in the library, it happened a bit suddenly and my eyes would jump to the dialogue and I would get kind of confused. Like, when did they get here? They aren't in the library????? I guess it's probably because I'm used to the writing being italicized whenever there's a memory in a book.

Jeff was such a great guy. I was expecting him to act so terrible about Autumn falling for Dax, I was dreading that moment. In all honesty, the situation was just so much simpler than pretty much every book I've ever read with that sort of situation. Jeff is definitely one of my favourite characters in this book.

In conclusion, you should read this book. If you're in a slump, it's a quick read, it won't stress you out. It's a good one.

“Books, bringing people together.' That would make a good slogan for the library.”

“Even though I knew this might end in heartbreak, that he might make my life scary and complicated and unpredictable, I knew I couldn't let him walk away. Because I knew he'd also make my life happy and comforting and full.”

“The was something very satisfying about a smile that had to be earned.”

“I was locked in the library trying not to panic. Literally locked. As in, no escape. Every door, every window, every air vent.”