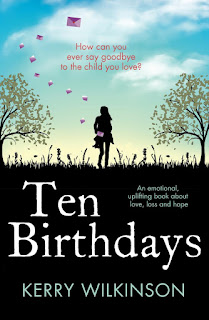 "There are going to be so many things I wish I could’ve told you in person, Poppy. I won’t get the chance to do that, so perhaps this is my only way…"

She should be blowing out candles and opening presents – but hers falls on the type of heart-wrenching, agonising anniversary she would far rather forget.

The worst day of them all. The day her mother died.

But this year is special because the person she misses most in the world has left her a set of letters, one for each of her next ten birthdays.

As Poppy opens them year by year, she discovers that no matter how tough life gets, her mum will always be by her side, guiding her along the way.

*** I received an ARC through Netgalley***

I really enjoyed this book. There was a while there where I wasn’t sure if I was gonna like it, but after I got past that I couldn’t put it down.

This book was more of a character and theme book more than it was a plot book. I felt like I could relate to the characters so much, they felt so real to me. They had the type of problems I have had.

I was really annoyed with Freya for most of the book. She was just so obnoxious for the most part, but she calmed down with age. She definitely got better as the story progressed.

I couldn’t even really hate any of the characters, even the ones who were antagonistic, because they were portrayed as real people with real problems. Like Iris, she was being a bit awful, but that’s because she was miserable with her life, she wasn’t happy. I can understand why she wasn’t the greatest, I wouldn’t have been either if put in her shoes.

I felt a bond with the story itself, a lot may not have happened, nothing overly dramatic, but it still spoke to me on some level. Even if things aren't going the way you planned, that doesn't mean they're bad, things will get better in the long run.

I'm also a sucker for stories where someone dies and they leave notes for people they love. It's something I will always enjoy reading about, or watching. I'm probably gonna be the sap who does this in the future.


Overall, a really good contemporary read. I would definitely recommend it.
Posted by Jessie at 16:02