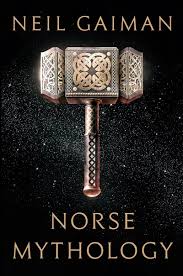 Neil Gaiman has long been inspired by ancient mythology in creating the fantastical realms of his fiction. Now he turns his attention back to the source, presenting a bravura rendition of the great northern tales.

In Norse Mythology, Gaiman stays true to the myths in envisioning the major Norse pantheon: Odin, the highest of the high, wise, daring, and cunning; Thor, Odin’s son, incredibly strong yet not the wisest of gods; and Loki, son of a giant, blood brother to Odin and a trickster and unsurpassable manipulator.

Gaiman fashions these primeval stories into a novelistic arc that begins with the genesis of the legendary nine worlds and delves into the exploits of deities, dwarfs, and giants. Once, when Thor’s hammer is stolen, Thor must disguise himself as a woman, difficult with his beard and huge appetite, to steal it back. More poignant is the tale in which the blood of Kvasir, the most sagacious of gods, is turned into a mead that infuses drinkers with poetry. The work culminates in Ragnarok, the twilight of the gods and rebirth of a new time and people.

Through Gaiman’s deft and witty prose emerge these gods with their fiercely competitive natures, their susceptibility to being duped and to duping others, and their tendency to let passion ignite their actions, making these long-ago myths breathe pungent life again.

I don't really know what to do about spoiler warnings for this one. It's kinda hard to spoil mythology for people

I gave this book 5 stars. There is almost nothing I love more than mythology. I just find it so fascinating and exciting, which is why it was a no brainer for me to read this book. I really flew threw the second half of it this morning.


This book was just so much more exciting than if I had just decided to research all of it online. This book had soul, unlike others's retellings of Norse Mythology. This was the first book I've ever read by Neil Gaiman and I have to say, I'm really impressed. If it had been any other author writing this, I might not have been as engaged as I was.

I liked the characters, I felt like they were very accurately portrayed in this book. The Gods were so outrageous. Their thought process was just so outlandish to me. They were also really stupid at times, like when they told others of their weaknesses because they were just so arrogant as to think they were above it all.

Also, Loki, that little trickster. I need him in my life. To me, it felt like he was the only one in the book that wasn't an idiot and that was why everyone considered him all clever. It wasn't because he was really smart, it was because the gods were kind of idiots.

They were also very casual about losing limbs. Baldur didn't even seem to care about losing his arm. Absolutely ridiculous. Also Odin, he fricken just jumped into Fenrir's mouth?! Why? I'm just at a bit of a loss because of these stupid gods doing stupid things.

I would recommend this book to everyone. Even if you don't generally like mythology, I think you would like this book. It's a fast read, a collection of these short stories, easy to just take breaks in between if you so feel like it. It isn't heavy.

“Because,” said Thor, “when something goes wrong, the first thing I always think is, it is Loki’s fault. It saves a lot of time.”

“Of course it was Loki. It's always Loki.”

“The fun comes in telling them yourself—something I warmly encourage you to do, you person reading this. Read the stories in this book, then make them your own.”

“Fair enough,” said Thor. “What’s the price?” “Freya’s hand in marriage.” “He just wants her hand?” asked Thor hopefully. She had two hands, after all, and might be persuaded to give up one of them without too much of an argument. Tyr had, after all. “All of her,” said Loki. “He wants to marry her.” “Oh,” said Thor. “She won‘t like that.”