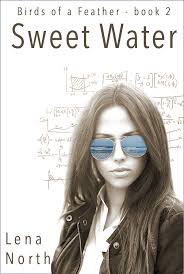 Jiminella “Jinx” Sweetwater is a genius. She’s a scholar, an inventor, hardworking and loyal, and well known in the scientific circles around the University in Prosper City.

Being smarter than everyone else might seem like a good thing, but it isn’t. At least, it isn’t to Jinx who has two friends, a small condo, and no life.

After a fight with her best friend Wilder, it just gets worse. Someone breaks into her home and when her parents show up in all their hippie-like glory, Jinx has had enough and escapes to a small village by the sea.

Suddenly, Jinx finds herself involved in village life, living with the unpleasant Mrs. Fratinelli and trying her best to juggle all the things that end up on her plate. And then there’s calm, cool and gorgeous Dante – Snow’s boyfriend, who seems to see right through the shields Jinx has put up around herself, straight into her mind.

***I received and ARC though NetGalley***

I gave this book 5 stars. Honestly, my expectations were a bit low going into this, not because I didn't like the first book, but because I didn't particularly like Jinx that much in Wilder. I was completely wrong in my assumptions that I would dislike this book. I loved it, it was exciting and had lots of twists and turns, I could not get enough. I basically read the entire thing in one sitting. That good.

I was so happy that I got more of Bozo. He's got to be my favourite character in this series. He's outrageous and funny. Any part with him in it is going to be a good scene. No doubt in my mind.

I grew to love Jinx in this book. She was a bit more closed off in the first book, but I guess that's just because she doesn't tell others much about herself and her past. Getting to know her in this book was great. Her story was so captivating. Her as a person is absolutely captivating. She was not the person I first judged her to be.

Okay, so I guess this is only a spoiler if you haven't read the first book, in which case check out my review for Wilder here. Okay continuing on, I was also a bit apprehensive bout reading it because I thought there was going to be some cheating going on on Dante's part. You'll understand what I mean if you've read Wilder. I am happy to say that this never happens and it was like a weight was lifted off my shoulders because there is nothing I hate more than people cheating in books.

I liked how there was a bit of magic sprinkled in. It wasn't the whole plot line, that wasn't what it was about. It was about people who had magic that were living their everyday lives. Not all their conflicts had to do with magic. They had problems other than magical ones. You don't normally see that in books with magic. Magic always seems to cause the conflict.

Overall, I loved this book. You should read it. I would suggest reading Wilder first. I mean, you probably could read this one as a stand alone, but I would not recommend that at all.
Posted by Jessie at 23:55