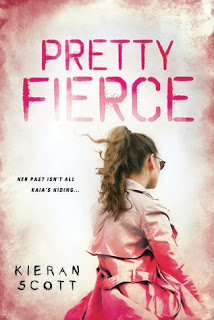 Kaia has been on the run her whole life. The daughter of professional assassins, she knows true danger—and she’ll do anything to survive. After her parents vanished during a job gone bad, Kaia’s spent the last year in hiding, trying to blend in as an ordinary teenager, and there’s no one who makes her feel more normal or more special than her boyfriend, Oliver.

But when she’s jumped by a hit man, and Oliver catches her fighting back, Kaia’s secret is exposed. In a split-second decision, she flees the small town, taking Oliver with her. With professional killers stalking their every move, can Oliver and Kaia protect each other long enough to uncover the mysteries of her past?

***I received an ARC through Netgalley***

I gave this book 3 stars. I had a bit of an issue reading it because there was a formatting error or something that caused some sections to have no spaces between words and I had to try extra hard to figure out what it was saying.

Other than that I thought it was a decent read. It definitely had lots of action, which I love. I also love the whole, on the run, thing. It's a guilty pleasure of mine.

I didn't feel overly attached to the characters. I felt bad for their situations, but I wasn't all that invested in their lives.

I did really like the cover though, I have to give them that.
Posted by Jessie at 17:04