The Scorpio Races
by Maggie Steifvater 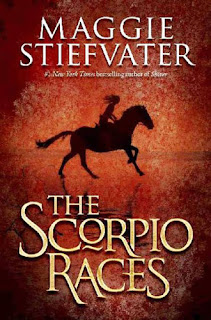 It happens at the start of every November: the Scorpio Races. Riders attempt to keep hold of their water horses long enough to make it to the finish line. Some riders live. Others die.

At age nineteen, Sean Kendrick is the returning champion. He is a young man of few words, and if he has any fears, he keeps them buried deep, where no one else can see them.

Puck Connolly is different. She never meant to ride in the Scorpio Races. But fate hasn’t given her much of a chance. So she enters the competition — the first girl ever to do so. She is in no way prepared for what is going to happen.

I gave this book 5 stars. I understand why this book has won awards. This is a fantastic book, especially for people who love horses. This was a wild twist on a  horse race.

First thing I have to say is that I love the UK cover of this book. It's so beautiful. When I was at the book store I didn't mean to pick this book up, but it was so pretty and it was only 7 dollars so I had to get it. I regret nothing. 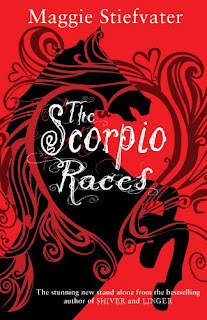 The ending when Corr stayed with Sean and didn't run off left me with a smile on my face. He gained the love of this wild sea horse, a horse that was never supposed to be owned by people. Who killed the last person who got too close to him. He loved Sean and stayed behind when he was hurt.

I loved that the book wasn't centred around a romance. I mean, the two leads definitely grew close. But they never got together and that wasn't what the book was about. It was about family, determination, and trying to forge a new path. The leads never even kissed in the entirety of the book. I have no doubt that if the book kept going, they most likely would have gotten together.

The mood of the book, for me at least, was a bit dark, ominous. Whenever I thought about this book I just thought of a storm. Which makes sense considering the story. Where it takes place, an island away from any large cities were it rains a lot and there are horses that come out of the sea and they're all mean and vicious. Makes sense.

Now, the ending of this book was a bit sudden for me. I wanted to know why Gabe was leaving. He had to have some ulterior motive, he couldn't just leave them behind because he couldn't take it anymore. It felt like he didn't care about them anymore, like they just weren't worth it to him and that made me sad. But I guess it was a very real thing to happen. Not everyone is a going to stick around, and sometimes you just have to do what's good for you. Doesn't mean that it's any easier though.

I'm also curious as to how old these characters are. I got the vibe that they were around 16 or 17. And if so, then why aren't they in school? Do they not have to have education where they're from? I also want to know what time period this was, and where this place was geographically. The Setting of this story drew a huge blank in my mind. All I could gather was that they were not in a fantasy world and they were not in America.

I also want to know how Puck got into a, let's call them Sea Horses, Sea Horse Race without having a Sea Horse. She didn't and that's what I don't get about he entire situation, isn't there some rule about specifically needing one of these horses to be in the race.

I finished the book with more questions than what I had before the book started. It was an amazing fast paced book, there is no doubt about it. It just left me confused and wanting more.

“I say, 'I will not be your weakness, Sean Kendrick.'Now he looks at me. He says, very softly, 'It's late for that, Puck.”

“I hear laughter and someone asks if I need help, not in a nice way. I snarl, 'What I need is for your mother to have thought a little harder nine months before your birthday.”

“It's easy to convince men to love you, Puck. All you have to do is be a mountain they have to climb or a poem they don't understand.”

“Does anyone ask you why you stay, Sean Kendrick?""They do.""And why do you?""The sky and the sand and the sea and Corr.”