A World Without You Book Talk

A World Without You
by Beth Revis 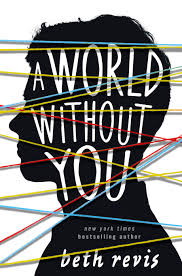 What if finding her means losing himself?

Seventeen-year-old Bo has always had delusions that he can travel through time. When he was ten, Bo claimed to have witnessed the Titanic hit an iceberg, and at fifteen, he found himself on a Civil War battlefield, horrified by the bodies surrounding him. So when his worried parents send him to a school for troubled youth, Bo assumes he knows the truth: that he’s actually attending Berkshire Academy, a school for kids who, like Bo, have “superpowers.”

At Berkshire, Bo falls in love with Sofía, a quiet girl with a tragic past and the superpower of invisibility. Soíia helps Bo open up in a way he never has before. In turn, Bo provides comfort to Sofía, who lost her mother and two sisters at a very young age.

But even the strength of their love isn’t enough to help Sofia escape her deep depression. After she commits suicide, Bo is convinced that she’s not actually dead. He believes that she’s stuck somewhere in time—that he somehow left her in the past, and that now it’s his job to save her. And as Bo becomes more and more determined to save Sofía, he must decide whether to face his demons head-on or succumb to a psychosis that will let him be with the girl he loves.

I gave this book 4 stars. I really don't know how to even explain this book. Where do I start?

I think that the author did a very good job on broaching the subject. It can be a very touchy thing, mental illness, and she put it into terms that were understandable.

I was confused for most of the book, I really couldn't tell what was real and what wasn't, the main character Bo was so sure that he and his classmates had superpowers. He was utterly convinced, his mind even manipulated situations to fit his beliefs. He thought he had superpowers, so all the others in the school were like him, they had superpowers just like him so that he wouldn't feel different.

This book was a very interesting perspective on mental illness. I haven't really read many books about mental illness, especially to this extent.  It made me feel like I was tripping, gave me a bit of an Alice in Wonderland sort of feel, only he didn't go to a whole other world, just different times. What I'm most curious about, is what his diagnosis is. What type of illnesses does he have? What do they do? what was their part in the story?

I liked that the story wasn't only from Bo's point of view, but also from his sister Phoebe's. It gave me an idea of what was real and what wasn't. It gave us a look into her "Sane" point of view on the whole thing, how she felt, what it's like to live with someone who is unwell.

The whole Sofia aspect was so heartbreaking. Bo was so devastated that he created an entirely new scenario in which, Sofia never killed herself, he did not find her dead, he had just sent her back in time. He could still save her, there was still a chance for her. He had hope for the entire situation. When he finally came to the conclusion that Sofia was truly gone and she wasn't coming back, I just wanted to huge him so badly. He had just been through so much.

I'm happy about how this book ended, it was sad for most of the book, at times, I thought he wasn't going to get into a better place. He did. He got to a stable place, he went to that new school in New York and it helped him lead a better life. I finished the book with a smile on my face.  I would definitely recommend this book to everyone. Everyone.


“There's a meaning behind blank pages, too.”


“I can think of no better way to meet a girl than to see her through the eyes of the story she loves best.”


“You never know all of a person; you only know them in a specific moment of time.”