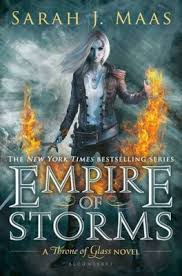 The long path to the throne has only just begun for Aelin Galathynius. Loyalties have been broken and bought, friends have been lost and gained, and those who possess magic find themselves at odds with those who don't.

As the kingdoms of Erilea fracture around her, enemies must become allies if Aelin is to keep those she loves from falling to the dark forces poised to claim her world. With war looming on all horizons, the only chance for salvation lies in a desperate quest that may mark the end of everything Aelin holds dear.

Aelin's journey from assassin to queen has entranced millions across the globe, and this fifth installment will leave fans breathless. Will Aelin succeed in keeping her world from splintering, or will it all come crashing down?

I gave this book 5 stars. I love Sarah J Maas and all the books she has ever written. This book did not disappoint at all.

I have to start off by saying, it's been a while since I read Queen of Shadows, so I was a bit rusty on some of the things that had happened and who was who, so I went onto the character wiki page for Aelin, because I couldn't remember who Aedion's mother was related to, or at least, I just wasn't completely sure. So I went in to look through family members, and my eyes skipped over names and landed on Rowan's name, and next to this, it says how he relates to her. This book had barely been out a week and someone had already changed the wiki page and spoiled everything for me. I feel like you should wait at least a month or so before you start changing things. I used to enjoy spoilers, but now they just come at too high of a price. Now,a s for the spoiler, I'll be talking about that in a bit. It's a real doozy.

When I finished Queen of Shadows, all I could think about was "How can Maas work with this? How is she going to create a unique friction in this next book." I couldn't think of what could happen when they got to Terrasan. It totally threw me for a loop when Darrow appeared and was like, "Nope, I got the signatures of all these lords that say they don't want you on the thrown." I was just waiting for Aelin to finally kill someone for pissing her off, she didn't, but she did have clever little mind games. And I may have just enjoyed those more.

I loved the way the characters just grabbed my sympathies. I didn't hate any of the characters that I was supposed to like. And oh gods, the ships. There were so many ships. Aylin and Rowan, Manon and Dorian, Lorcan and Elide (Can someone tell me how to pronounce her name, I have no idea), even Lysandra and Aedion.

Elide, in the last book, wasn't really expanded on all that much, she just had that really sad past, she was a slave, and then her uncle tried to breed her with some demons, I felt bad for her, but I didn't really care about her trials and stuff. In this book, I started to root for her. I want her to get everything she wants, I want her to kill that uncle of hers, I want her to get with Lorcan because they are really cute together, and I want her to get her title and everything back. I also want her to learn to read. I feel like she would be the type to love books. Total bookworm.

My favourite scene from the book was when Aelin suddenly showed up in Skulls Bay and was in Rolfe's chair and he was being all standoffish and Rowan was playing her game. Aelin was pretending to be Celaena and was being playful with everyone in the room.

I can also anticipate that Manon and Dorian hooking up has made a great many people very, very happy. I myself thoroughly enjoyed it. I've missed this playful, cocky Dorian so much. First book Dorian is better than ever and i hope he stays this way. I really do love him.

Okay, time for the reveal of that huge spoiler. So when Maeve finally appears near the end and there is this whole showdown, and it's revealed that Aelin and Rowan are mates, now this I sort of gathered throughout the last couple of books since they just seemed too in love to not be mates, so no that was not the spoiler. The spoiler happened after this whole showdown, after Aelin was taken by Maeve. When Rowan finds out that something is wrong her starts saying things like, "Where is Aelin? Where is my wife?" And that's what was spoiled for me. What was supposed to be a whole secret revealing was spoiled for me by someone who had zero patience. I'm actually so upset by this.

Maeve needs to die. She ordered Cairn to whip Aelin and no one could do anything about it, it wa so devastating. I kept thinking to myself, "Rowan's gonna come. He's gonna get them out of this situation." but deep down I knew that that wasn't going to happen because I've read Sarah J. Maas books before and I know the drill. I swear I shed a tear. I don't think I can't wait for the next book. I really need it right now.

"Despite herself, despite what she'd done, she decided she wanted Rowan to call her Milady at least once every day."

“The world will be saved and remade by the dreamers.”


“Aelin had promised herself, months and months ago, that she would not pretend to be anything but what she was. She had crawled through darkness and blood and despair-she had survived.”


“Aelin Galathynius had raised an army not just to challenge Morath, but to rattle the stars.”


“The useless sentries in the watchtower are now all half in love with you,” he lied. “One said he wanted to marry you.”  A low snarl. He yielded a foot but held eye contact with her as he grinned. “But you know what I told them? I said that they didn't stand a chance in hell. Because I am going to marry you,” he promised her. “One day. I am going to marry you. I'll be generous and let you pick when, even if it's ten years from now. Or twenty. But one day, you are going to be my wife.”  He shrugged. “Princess Lysandra Ashryver sounds nice, doesn't it?”


“Fireheart,” he said onto her mouth. “Buzzard,” she murmured onto his.”