The Bronze Key
by Holly Black and Cassandra Clare 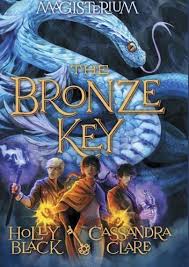 Magic can save you.
Magic can kill you.

Students at the Magisterium are supposed to be safe. Under the watchful eyes of the mages, they are taught to use magic to bring order to a chaotic world.

But now the chaos is fighting back. Call, Tamara, and Aaron should be worrying about things like pop quizzes and magic contests. Instead, after the shocking death of one of their classmates, they must track down a sinister killer… and risk their own lives in the process.

As Call, Tamara, and Aaron discover, magic can only be as good as the person who wields it. In evil hands, it has the capacity to do immeasurable harm, unless it is stopped in time.

In this striking third book of Magisterium, bestselling authors Holly Black and Cassandra Clare present us with a school where anything, good or evil, can happen, and the only way to unlock the truth is to risk everything to find it.

I gave this book 4 stars. Not as much happened in this book. I still really enjoyed it, it was just more on the slower side then the last two books. That's not to say that i didn't really like it because I did.

Okay, from he moment the trio broke into Anastasia's room I knew she was the mother of Constantin and Jericho, I mean, Constantine's bracelet opened her bedroom door and the password for her vault was Jericho. Also, she supposedly was not a followed of the Enemy of Death, so if not, she wouldn't have pictured of them in her room. The exception being, if she were their mother. There was a point in the book where I doubted my theory, but it ended up being true and I'm interested to see how this plays out in the next book.

I also figured out that Alex was the spy when they brought Jennifer back and she was going on about Kimiya staying away from someone. The only person who was known to be around Kimiya a lot was Alex, plus he was the stepson of Anastasia which was some added suspicion. I later found out that they were not linked in that way and they had totally different motives that the other had no idea about. This theory wasn't really that hard to figure out, I thought it was pretty clear and most people reading this probably agreed.

Aaron's death just happened so fast. I was kind of expecting it since Marcus was going on about how one would fail, one would die, and one was already dead. Since Call was already dead, I figured Tamara would be the one who failed, just because I'm going to assume here that she is going to be Call's love interest. I think that was what she was trying to tell him when he asked her why she saved him and not Aaron. She was going to say that she really liked him.

I think Tamara's crush on Call was hinted on throughout the book. She would always get snarky and grumpy whenever her mentioned Celia and that moment when Jasper talking about questions being asked and how one of them was "Do they have girlfriends?" and Tamara got really defensive, like "Why would they have girlfriends?" She was not impressed.

Before this book, I liked Celia enough, I guess. Didn't love her, didn't hate her. But after this book i just wanted someone to punch her in the face. I mean, she was just so obnoxious, thinking that just because Call yelled out her would be alone, that he wanted her to come see him so her could ask her out. I think she needs to realize that he just was not that into her. Not only this, but she then goes and tells people about Aaron's father. it really wasn't any of her business, not her secret to tell, but she does it anyway. I seriously hate her.

Okay, on the bright side, there was that part where Jasper was giving romance advice. Oh my god, I can't believe any of that actually worked for him. How oblivious is Celia?  How does she not notice that he always says that whatever colour she is wearing his favourite colour. Makes her seem a bit self absorbed. Another reason for me to dislike her. It was good to see the trio having a good time though. Call was laughing, Aaron was laughing, even Tamara was laughing. I'm going to miss those days.

“Aaron looks like a con man who got hit with a shrink ray and you look like you're going to Catholic school.”

“He wondered if it had occurred to Tamara to ask him to dance, but he knew she would always choose Aaron first. He’d accepted it a long time ago. He didn’t even really mind.”