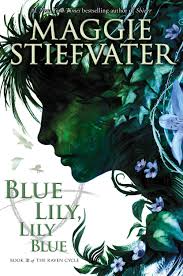 There is danger in dreaming. But there is even more danger in waking up.

The trick with found things though, is how easily they can be lost.

Friends can betray.
Mothers can disappear.
Visions can mislead.

I gave this book 5 stars. The books in this series just keep getting better and better. I'm terrified yet excited to read the last book in the series.

Blue and Gansey have been getting so close and adorable and I ship them so hard. I feel like their slow burning relationship is going to be one of the most satisfying ones in literature history. I mean, they're gone three books without even kissing yet. When it finally happens I'm probably going to cry, or sob. (I cry easily). Something about anticipation makes everything so much better. Relationships can go stale if the couple in question gets together to soon.

Now Gansey, his future is in question because I feel like it's incredibly obvious that he is Blue's soul mate, but it hasn't exactly been confirmed yet, I mean, she could have just killed him and that was why she say his spirit in the first book. So they may not even be soul mates and that makes me nervous. What else makes me nervous is that Gansey is going to die no matter what, we just don't know how or when or if he is going to come back to life at all. I just want Blue and Gansey to be together.

Throughout the series, Noah has managed to keep my attention. Something weird happens to him in every book. He's also really sad, I just don't want this kind of after life for him. He still seems like he is suffering and he's also very ominous at times. I want to know what's going on with him. Will everything be better by the end of the series or will he be stuck reliving his death all the time, having temper tantrums and disappearing at random times.

Also, Blue has been confronted by the fact that she has to choose something for her future. She wants to go to school and get a degree, but she doesn't exactly have the funds and she may not even get in. She's also threatened by the fact that all of her friends are going to go onto higher education, they will leave and she'll just be left behind. I mean thinking about it, Noah would probably still be there, but the rest are probably going to leave.

Oh my gods, the part where it's revealed that Ronan actually dreamt Matthew into existence, I actually gasped. I feel like maybe I should have expected that since it was sort of hinted at in earlier books. Like when he was described as looking more like his mother than his father while Ronan and Declan both take after their father. Now thinking about it, that whole thing probably has to be resolved, cause if Ronan dies, then Matthew will fall asleep and never wake up. Anyway, Ronan's going to have an entire series to himself soon, so I guess it could be resolved there.

Also, Ronan and Adam are getting closer, since I sadly spoiled myself for that. I can see it all clearly now and every-time they're alone together my internal mantra is "KISS! KISS! KISS!" I can't wait to read the next book specifically for this reason.

I'm also curious about Artemis making a reappearance and what that could mean for Maura and Mr. Gray, also blue, but mostly the former.

I want to know more about the sleepers. Who are they? What are they? What's keeping them asleep, or I guess awake in Gwenllian's case. They just feel very creepy and sometimes ignorance is not bliss. I want information.

At first I couldn't really remember who the Greenmantle was, but I caught on quickly because it did in fact seem familiar. He wasn't as evil as I thought he was. I actually really liked him, it was his wife, Piper that I wasn't all that fond of. She was just very self absorbed. Let's just say that her ambition and evilness make her a Slytherin.

“I know when I'm awake and when I'm asleep," Ronan Lynch said.Adam Parrish, curled over himself in a pair of battered, greasy coveralls, asked, "Do you?""Maybe I dreamt you," he said. "Thanks for the straight teeth, then," Adam replied.”

“As they moved through the old barn, Adam felt Ronan’s eyes glance off him and away, his disinterest practiced but incomplete. Adam wondered if anyone else noticed. Part of him wished they did and immediately felt bad, because it was vanity, really:   See, Adam Parrish is wantable, worthy of a crush, not just by anyone, someone like Ronan, who could want Gansey or anyone else and chose Adam for his hungry eyes.”

“It kills Dittleys and does terrible things to my friend.""YOUR DEAD FRIEND.""That's not his fault. Why didn't you say you could see him?""I DIDN'T SAY I COULD SEE YOU, EITHER.""But I'm not dead.""BUT YOU ARE PRETTY SHORT.”

“Behind him, he heard Ronan say, "I like the way you losers thought Instagram before first aid. Fuck off.”

“What do we do now?" Gansey asked.From the other room, Calla bellowed, "GO BUY US PIZZA. WITH EXTRA CHEESE, RICHIE RICH."Blue said, "I think she's starting to like you.”