The Raven Boys
by Maggie Stiefvater 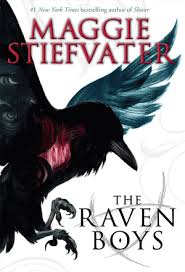 Every year, Blue Sargent stands next to her clairvoyant mother as the soon-to-be dead walk past. Blue herself never sees them — not until this year, when a boy emerges from the dark and speaks directly to her.

His name is Gansey, and Blue soon discovers that he is a rich student at Aglionby, the local private school. Blue has a policy of staying away from Aglionby boys. Known as Raven Boys, they can only mean trouble.

But Blue is drawn to Gansey, in a way she can't entirely explain. He has it all — family money, good looks, devoted friends — but he's looking for much more than that. He is on a quest that has encompassed three other Raven Boys: Adam, the scholarship student who resents all the privilege around him; Ronan, the fierce soul who ranges from anger to despair; and Noah, the taciturn watcher of the four, who notices many things but says very little.

For as long as she can remember, Blue has been warned that she will cause her true love to die. She never thought this would be a problem. But now, as her life becomes caught up in the strange and sinister world of the Raven Boys, she's not so sure anymore.

From Maggie Stiefvater, the bestselling and acclaimed author of the Shiver trilogy and The Scorpio Races, comes a spellbinding new series where the inevitability of death and the nature of love lead us to a place we've never been before.

I gave this book 5 stars. I really loved this book. I went into this book not really knowing what it was about other than it was written by Maggie Stiefvater, who I love, and that everyone seemed to love this series more than any of her other works, which is a good sign. I was not disappointed.

Let's start with Noah. At first, he seemed to be the odd one out, he didn't really seem to have a place in the raven boys or really much purpose, I mean, Gansey was the leader, Adam was the trailer park kid that wanted to get out and make it big on his own, and Ronan was the rich kid with daddy issues, and brother issues, he had a lot of problems. Then there was Noah, who was barely ever around, he just sort of appeared at random times and barely spoke to anyone, not really contributing anything, but then comes the big plot twist. It turns out that Noah has been dead this whole time. Seven years. And no-one seems to notice this until they find his car and bones in the forest when checking out magical shit.

I grew to love Noah, not only his growing friendship with Blue, but also the fact that he has a Blink 182 sticker on his car. I love Blink 182. Him and Blue have the most adorable friendship, normally, I would have found it a bit condescending for someone to pet someone on the head, but Noah was just too cute to be condescending, he even got sad when her hair wasn't spiky.

Right from the start, I loved Ronan, I swear he is my soul mate. When he named his pet raven Chainsaw, it reminded me of this one scene from the Good Dinosaur. If you've seen the movie, you should know what I'm talking about, if you don't understand, you probably haven't watched the movie and I would highly suggest watching it.

I loved the fact that the book is about Welsh mythology and legends. I don't think I've ever actually heard of anything that had to do with Welsh mythology and I love learning about this new mystery. I love mythology, mostly Greek, Roman, and Norse, but maybe there will be a new love in my life.

I hate to say this, but I think that Adam is my least favourite Raven boy. I mean, I like him and I'm totally rooting for him, I want him to get everything that he wants in life, except maybe Blue because I really do like her with Gansey.

I feel like the whole "If you kiss your true love, he will die" thing is a bit much to put on a kid. Blue has so much to worry about because she doesn't know exactly who this is, she doesn't get to be a normal teenager and kiss boys and go on dates and fall in love, she knows that if she does this with the wrong person, it could kill them. I feel really bad for Blue.

Okay, this may have been really obvious, but I think that the Raven King guy is Blue's father and that he had this whole fling with Blue's mother and they fell in love, but then something sucked him back into his grave or something along those lines. I don't know, this is just a theory, but I believe in my theory.

I think that is all of my thoughts on this today, I'm reading the Dream Thieves right now, so that review should be up pretty soon.

"Also, truth be told, he wasn't very good at flying a helicopter, despite several lessons. He seemed to lack the important ability to orient himself vertically as well as horizontally, which led to disagreements involving trees. He comforted himself with the knowledge that, at least, he could parallel park very well."


“You are being self-pitying."
"I'm nearly done. You don't have much more of this to bear."
"I like you better this way."
"Crushed and broken," Gansey said. "Just the way women like 'em.”


“We have to be back in three hours," Ronan said. "I just fed Chainsaw but she'll need it again.""This," Gansey replied "is precisely why I didn't want to have a baby with you.”


“I guess now would be a good time to tell you," He said. "I took Chainsaw out of my dreams.”