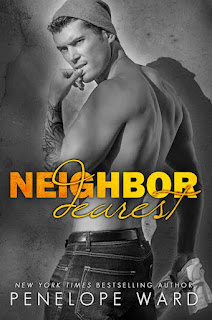 After getting dumped, the last thing I needed was to move next door to someone who reminded me of my ex-boyfriend, Elec.

Damien was a hotter version of my ex.

The neighbor I’d dubbed “Angry Artist” also had two massive dogs that kept me up with their barking.

He wanted nothing to do with me. Or so I thought until one night I heard laughter coming through an apparent hole in my bedroom wall.

Damien had been listening to all of my phone sessions with my therapist.

The sexy artist next door now knew all of my deepest secrets and insecurities.

We got to talking.

He set me straight with tips to get over my breakup.

He became a good friend, but Damien made it clear that he couldn’t be anything more.

Problem was, I was falling hard for him anyway. And as much as he pushed me away, I knew he felt the same…because his heartbeat didn’t lie.

I thought my heart had been broken by Elec, but it was alive and beating harder than ever for Damien.

I just hoped he wouldn’t shatter it for good.

I actually saw this book around for a while and after reading the synopsis, I wasn't all that interested. I just figured it was just another basic romance novel. It totally was, but it was still really good. I forgot how much I loved mushy, cute, sexy romance novels. I think that this book was worth every hour I spent reading it.

I noticed that there was a book about Chelsea's cheating ex, I kind of want to read it, but from this book I realized just how much I hate cheating. I don't know if I will be able to connect with the characters in Stepbrother Dearest because of this whole thing since I've now seen how much it effected the main character. I might end up reading it, but I just don't know right now. Anyway, if you've read it and you think I should give it a try, just leave me a comment, and I'll give it a try.

Damien was pretty angsty and mean at first, I thought I had his whole character pegged. I thought he was going to be the asshole, the devil may care, sort of man. He really wasn't. Maybe a bit rough around the edges, but once we got to know him better, he was really sweet and caring, a little misguided at times, but a sweetheart nonetheless. He was also the perfect amount of possessive. He wasn't like, "Oh, you can never be with anyone else, you're MINE!!!" he was more like, "I love you, I want to be with you, and I hate the thought of you being with another man, so be with me." He didn't get violent when things didn't go his way, he got a bit loud and shouty at times, but he never threw things or hit people and I think that's a huge defining point in a romance novel. Usually, the love interest is very macho alpha male that must assert dominance with fists.

I liked Chelsea. She was fun and predictable and I totally understand the way she felt about her past relationship. It wasn't just some guy she went out with for a couple weeks who suddenly just broke it off with her. It was a man who she was with for years who she thought she loved and who she thought loved her back. The man bought her a ring, he was going to propose to her, but instead he cheated on her and left her for his stepsister. I think that entire thing was pretty messed up and would leave emotional scars on anyone. I actually think she handled it pretty well, she was a bit sad and moped, but she still lived her life, worked, didn't completely fall apart over him. I mean, she held onto her past, but that's to be expected when something like that suddenly comes about.

The one thing I didn't particularly like, was the fact that Ty kept telling Chelsea everything that Damien said to him before they got together. I like to have a bit of mystery, even if it's the tiniest bit. I also wish there was more of a confrontation between Elec and Chelsea, I feel like she needed the closure, she needed to get mad and yell at him and he had to apologize. Face to face, not through an email.

Overall, I felt like it was a very solid read.


“You only get one true love, one soulmate. Not everyone is lucky enough to find that person in a lifetime.”


“You can’t have it both ways, Damien. You can’t look at me the way you do … You can’t keep me close and treat me as if I’m a huge part of your life and expect me not to get attached to you. It’s unnatural and unhealthy, and whether it’s your intention or not, you’re hurting me.”


“Nothing has ever compared to how I feel about you. It’s made me question everything that ever came before it.”


“You know why it didn’t work out with him?”“Why?”“Because God made you for me.”