The Night Circus
by Erin Morgenstern 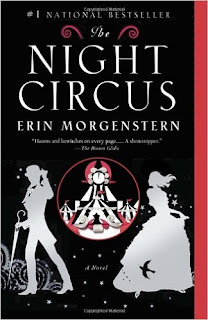 The circus arrives without warning. No announcements precede it, no paper notices plastered on lampposts and billboards. It is simply there, when yesterday it was not.

Within these nocturnal black-and-white striped tents awaits an utterly unique, a feast for the senses, where one can get lost in a maze of clouds, meander through a lush garden made of ice, stare in wonderment as the tattooed contortionist folds herself into a small glass box, and become deliciously tipsy from the scents of caramel and cinnamon that waft through the air.

Beyond the smoke and mirrors, however, a fierce competition is under way--a contest between two young illusionists, Celia and Marco, who have been trained since childhood to compete in a "game" to which they have been irrevocably bound by their mercurial masters. Unbeknownst to the players, this is a game in which only one can be left standing, and the circus is but the stage for a remarkable battle of imagination and will.

As the circus travels around the world, the feats of magic gain fantastical new heights with every stop. The game is well under way and the lives of all those involved--the eccentric circus owner, the elusive contortionist, the mystical fortune-teller, and a pair of red-headed twins born backstage among them--are swept up in a wake of spells and charms.

But when Celia discovers that Marco is her adversary, they begin to think of the game not as a competition but as a wonderful collaboration. With no knowledge of how the game must end, they innocently tumble headfirst into love. A deep, passionate, and magical love that makes the lights flicker and the room grow warm whenever they so much as brush hands.

Their masters still pull the strings, however, and this unforeseen occurrence forces them to intervene with dangerous consequences, leaving the lives of everyone from the performers to the patrons hanging in the balance.

Both playful and seductive, The Night Circus, Erin Morgenstern's spell-casting debut, is a mesmerizing love story for the ages.

I gave this book 5 stars. This instantly became a new favourite of mine. This story was chocked full of romance, but it wasn't cliched or cheesy. It was a perfect blend of love and magic and I feel completely privileged to have read this amazing book.

The characters were all so special, in their own ways. I couldn't bring myself to hate any one of the characters, well except Celia's father, but I don't think he counts because we're not supposed to like him. I could go on about how much I love any single one of these characters and I think I will. Maybe not all of them, just some pretty important ones.

Poppet kind of reminded me a bit of Luna Lovegood from Harry Potter, except maybe a bit more down to earth. She's quirky and strange, but in a good way. She looks to the stars to tell her the future, she is just so sweet and kind. I love her.

Widget is just as strange. He may seem a bit less significant than the other characters for a while, but trust me, he is a very important character. He tells stories, he can read them off of cards, paper, even a person or object if he so pleased. He can usually see the past, I'm not quite sure about the future, but he can probably see that too.

Celia is magical. She is just so skilled and smart, and a true lady. It took me a bit too long to figure out her age, because I was picturing her as a teenager at first, but then I took a look at the dates, did some math, and realized she was in her twenties. She was such a good protagonist. Intriguing, mysterious, skillful. Really crafty, she had these powers we didn't know much about other than they would come into play at some point. She held the entire circus together.

Marco is a gentleman. I know, he kind of broke Isobel's heart, but that couldn't be helped. at least he broke up with her before he hooked up with Celia, now that would have been awful and I would have hated him for that. He was kind and considerate, he was a bit refreshing to be honest. most of the time when you read a book, the guy is cocky as a real ladies man, sleeping with everyone he possibly can, Marco didn't try to do that and I loved it.

Bailey, is Bailey. I don't even know where to start with him. He was such a sweet kid, it was also really interesting seeing him interact with the people in the circus. He was an outsider that was supposed to be one of them. It worked out rather beautifully.

The Circus itself was an enigma. I could see why so many people were intrigued by it. Honestly, I wish this story and these people were real. I would love nothing more than to go to the Night Circus and see all these cool acts and meet all these cool people.

The plot was intriguing, it kept me on edge throughout the entire thing, wondering how they could possibly get out of the dilemma, but it was all resolved in a believable loophole. I loved this book so much, I already feel like reading it again.

Celia and Marco's relationship was so lively and full. I don't know how else to explain it. They will definitely be on my end of the year ship list.  I was so in love with their love. They knew from the beginning that they could never be together, but that didn't stop them from tumbling head first in love. Their endurance was what made everything worth it to me. They didn't just fall in love right away and have everything fall into their laps. It took them years to figure out how to get through it.

This book is a must read. I would definitely recommend this book to everyone.

“You may tell a tale that takes up residence in someone's soul, becomes their blood and self and purpose. That tale will move them and drive them and who knows that they might do because of it, because of your words. That is your role, your gift.”

“Most maidens are perfectly capable of rescuing themselves in my experience, at least the ones worth something, in any case.”

“The circus arrives without warning. No announcements precede it. It is simply there, when yesterday it was not.”