The Heart of Betrayal Review

The Heart of Betrayal
by Mary E. Pearson 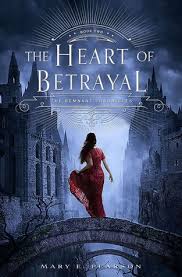 Held captive in the barbarian kingdom of Venda, Lia and Rafe have little chance of escape. Desperate to save Lia's life, her erstwhile assassin, Kaden, has told the Vendan Komizar that she has the gift, and the Komizar's interest in Lia is greater than anyone could have foreseen.


Meanwhile, nothing is straightforward: There's Rafe, who lied to Lia but has sacrificed his freedom to protect her; Kaden, who meant to assassinate her but has now saved her life; and the Vendans, whom Lia always believed to be savages. Now that she lives among them, however, she realizes that may be far from the truth. Wrestling with her upbringing, her gift, and her sense of self, Lia must make powerful choices that will affect her country... and her own destiny.

I gave this book 5 stars. I've been letting this simmer for a few weeks now and I have come to the conclusion that a lot of my thoughts and feelings about this book are very similar to the first book, so there really isn't that much to talk about, so this review will be pretty short. If you want more of my thoughts on this series, I will link the review to the first book here.

The one thing that really bothered me during the book was Mikael. It was revealed to Pauline that he was in fact alive, but she may no longer want it to be that way since she saw him with another woman. I don't know if this is some sort of misunderstanding, or if he really is a sleaze bag. I really want it to be a misunderstanding. I want Pauline to be happy, I really like her.

I really hate the whole love triangle part. I don't know why it's necessary considering I'm pretty sure we all ship her with Rafe. I honestly don't think there is a single person out there who actually prefers Kaden. Are you out there? Do you really exist, people who prefer Kaden?

The politics got a lot heavier in this book. I liked it, it added to the conflict. Not only is Lia an outcast, but she is now deemed a traitor to her country. It's interesting and I'm excited to see where the author takes this in the next book.

Hopefully, I will have more thoughts on the next book. I really didn't have many new thoughts on this story than I did for the last, just hold tight!


“But you’re everything I want. Remember that. I love you, Lia. Not a title. And not because a piece of paper says I should. Because I do.”

“And I began walking. A thousand miles, or two, I would carry her all the way to Dalbreck if I had to. No one would pry her from my arms again.”

“I’m not the farmer I claimed to be, but I hope I can make you fall in love with me again, this time as a prince, one day at a time. We’ve had a terrible start—it doesn’t mean we can’t have a better ending.”

“I finally pushed away and wiped my eyes. I looked at him, expecting to see his own embarrassment, but instead I only saw concern in his eyes. "You have a sister, don't you?" I asked."Three," he answered."I could tell. Maybe that's why I-" I shook my head. "I don't want you to think I do this a lot.""Cry? Or get abducted?"I smiled. "Both.”