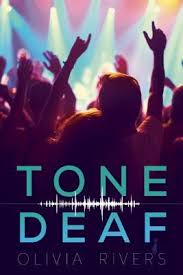 His world is music. Her world is silent.

Ali Collins was a child prodigy destined to become one of the greatest musicians of the twenty-first century—until she was diagnosed with a life-changing brain tumor. Now, at seventeen, Ali lives in a soundless world where she gets by with American Sign Language and lip-reading. She’s a constant disappointment to her father, a retired cop fighting his own demons, and the bruises are getting harder to hide.

When Ali accidentally wins a backstage tour with the chart-topping band Tone Deaf, she’s swept back into the world of music. Jace Beckett, the nineteen-year-old lead singer of the band, has a reputation. He’s a jerk and a player, and Ali wants nothing to do with him. But there’s more to Jace than the tabloids let on. When Jace notices Ali’s bruises and offers to help her escape to New York, Ali can’t turn down the chance at freedom and a fresh start. Soon she’s traveling cross-country, hidden away in Jace’s RV as the band finishes their nationwide tour. With the help of Jace, Ali sets out to reboot her life and rediscover the music she once loved.

I gave this book 4 stars. It had some dark content such as abuse, but still managed to have a lighthearted undertone. It was a lovely contemporary read.

From the first moment he was introduced, Killer was my favourite character. He was funny and exciting and he loves Doctor Who. I mean, who could dislike this guy. He is probably my soul mate. Him and Arrow are relationship goals. I just want another book about them. maybe with a wedding. And adoption. I want Killer to be a parent. What a wild ride that would be.

After Ali escapes from the confines of her home life, she talked about getting a plane ticket from Albuquerque, and I couldn't understand why she thought that she could just get on a plane and fly away considering, she is a teenage runaway, she is only 17 so she probably needs parental consent to go on a plane alone anyway, and she would have to use a passport which people could eventually trace it back to her. Just because there wasn't an amber alert out yet doesn't mean that people wouldn't notice that something was up. She did eventually realize that there would be a bit of a problem in her escape and decided to stick with the band.

Another thing that annoyed me was that, when Ali first came with them on the tour, she was afraid of dogs, and that's fine, but then Jace would lock Cuddles in his room for hours on end and then when he finally let her out, he wouldn't bring her on those long runs he usually brought her on, because he didn't want to leave Ali along. That is just not how you be a dog owner. I know that by the end of the book he said he would bring her on the longest run ever, but still. The upside to the whole thing was when Ali bonded with Cuddles. That may have been my favourite part of the book, or pretty close at least.

During the 2nd and 3rd fourths of the book I pretty much hated everyone except Cuddles, Killer and Avery. I already expressed my love for Killer, it's Avery's turn. She was just so supportive through everything, even when Ali was still at home. Avery would let Ali stay over at her place when things would go downhill with her father. Avery didn't even get mad that Ali left without telling her because she knew that her friend needed to leave for her safety.

Even Ali kind of annoyed me for a bit, she was just so terribly naive and that could have gotten her caught eventually. I mean when she first got her phone all she could think about was texting Avery and although the would have been great, the police probably already realized that she would want to text her best friend eventually and would have a tap on Avery's phone and track the number the second Ali texted her. Thankfully though, Killer thought ahead and also bought her a burner phone so that she could text Avery.

Also, if they had tracked her by her phone they would have realized she was in the same place as Tone Deaf and realized she had left on the same day as Tone Deaf. The police aren't stupid and that's a bit much to be a coincidence. I mean, who goes to Albuquerque on purpose?

So Jace, he has a pretty bad history, his home life sucked, he didn't feel like he could trust anyone until he met his band, but that whole tortured soul thing he has going on is no excuse for the way he acted. When he first met Ali he was the biggest douchebag. He knew nothing about he and when he finds out that she's deaf, he gets pissed off and flips her off then leaves. All I could think after that was, what is wrong with this guy. The next thing that made me angry was the way he treated Cuddles during the book, as you know because I already went over that. And next, the way he treats his fans. Most people are happy to have fans, they treat them well and a grateful to them. I think his fans deserve a gold bar each for sticking with him despite the way he treats them. I definitely wouldn't have stuck with him. Even though he was a pretty shitty person throughout the book, he had his good moments too. He stuck up for Ali to his bandmates and got her away from her abusive father. He realized that he isn't being a very good person and at times tried to fix it. He became self aware.

The people that I was mad at did eventually redeem themselves in the last quarter of the book, well all except Ali's father, but he's going to jail anyway so he doesn't need to redeem himself. Everyone just showed a lot of character development and they were growing as people, becoming better for themselves and those around them.

When clarity's gone and logic is done and love flees out the doorway, When kisses hurt and your heart is cursed and so carelessly cast away, When life's tumbling down, down, down, And nothing's there when you look up, Except the innocence you let life corrupt.

Serva me, servano te.“What does that mean?” Avery signs.I smile down at the phone as I recognize the familiar motto. “Hope”, I sign, remembering what Jace once told me. “It means hope.”

Rock concerts aren’t meant to be watched like silent movies. Period. End of story. No exceptions.

“Darling,” he finally says, his lips moving in a soft way that tells me he has a British accent, “it’s generally considered impolite to sit on someone with a hangover. Screaming is also rather rude.”