The Maritan
by Andy Weir 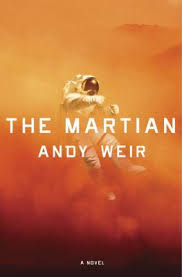 A mission to Mars.
A freak accident.
One man's struggle to survive.

Six days ago, astronaut Mark Watney became one of the first people to walk on Mars.

Now, he's sure he'll be the first person to die there.

After a dust storm nearly kills him and forces his crew to evacuate the planet while thinking him dead, Mark finds himself stranded on Mars' surface, completely alone, with no way to signal Earth that he’s alive. And even if he could get word out, his supplies would be gone years before a rescue could arrive.

Chances are, though, Mark won't have time to starve to death. The damaged machinery, unforgiving environment or plain-old "human error" are much more likely to kill him first.

But Mark's not ready to quit. Armed with nothing but his ingenuity and his engineering skills—and a gallows sense of humor that proves to be his greatest source of strength–he embarks on a dogged quest to stay alive, using his botany expertise to grow food and even hatching a mad plan to contact NASA back on Earth.

As he overcomes one seemingly insurmountable obstacle after the next, Mark begins to let himself believe he might make it off the planet alive.

But Mars has plenty of surprises in store for him yet.


Grounded in real, present-day science from the first page to the last, yet propelled by a brilliantly ingenious plot that surprises the reader again and again, The Martian is a truly remarkable thriller: an impossible-to-put-down suspense novel that manages to read like a real-life survival tale.

I gave this book 4 stars. It was an amazing book and I really loved it. I took off a star because of all the science. Okay it's about space travel and of course there is going to be a lot of science, but oh my gods, there was a lot of it, at the beginning of the book I was having a hard time concentrating on it because so much science. It was like this science lesson that I didn't quite understand.

So I need to address that. One of my friends said she couldn't read the book because there was too much science. It is literally what the book is about, so if you're planning on reading it, but you don't like science, then I would suggest not, because the book is literally humour and science. That's what it's all about.

Nonetheless, it was very well written and I felt I could relate to Mark Watney. Not because I'm also stuck in space, or the fact that I'm a super genius, but his personality. I don't know how to sum up Mark Watney. He basically has the skills of Tony Stark, but a more nerdy, less playboy personality. He is equally as funny though.

I new I was going to like this book from reading the first three lines:

The entire premise of the story had me intrigued. I don't think I've ever read a book like this, I felt like if someone ever got stuck on Mars this would be pretty realistic. Mark handled things beautifully, he would have his moment of being upset and then he would get his shit together and then continue onto whatever he needed to do to survive.

I loved how it was going back and forth between the people on Earth and Mark and then the people on Ares 3, it really helped me get a better perspective of everything that was happening at once and not just Mark's point of view where we would get less information.

Reasons why Mark Watney is my spirit animal:

How come Aquaman can control whales? They're mammals! Makes no sense.'

I honestly cannot wait to watch the movie. I hope the movie lives up to the book.