Daughter of Smoke and Bone
By Laini Taylor 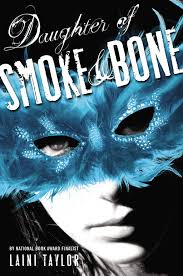 Around the world, black hand prints are appearing on doorways, scorched there by winged strangers who have crept through a slit in the sky.

In a dark and dusty shop, a devil’s supply of human teeth grows dangerously low.

And in the tangled lanes of Prague, a young art student is about to be caught up in a brutal otherworldly war.

Meet Karou. She fills her sketchbooks with monsters that may or may not be real, she’s prone to disappearing on mysterious "errands", she speaks many languages - not all of them human - and her bright blue hair actually grows out of her head that color. Who is she? That is the question that haunts her, and she’s about to find out.


When beautiful, haunted Akiva fixes fiery eyes on her in an alley in Marrakesh, the result is blood and starlight, secrets unveiled, and a star-crossed love whose roots drink deep of a violent past. But will Karou live to regret learning the truth about herself?

I gave this book 3 stars, but hold on there, I may have devoured this book, but I still had some issues with the plot and stuff that brought it down.

1.Instalove: Karou and Akiva fall in love in like 3 days, I'm having a Romeo and Juliet flashback and I honestly hated that play.

2. The story is set in Czech and they speak as if they are American, they use all this American slang that they definitely would not use in Czech.


3. He was hanging outside her bedroom window, watching her sleep and stuff, it just reminded me of Twilight and I didn't like Twilight and he followed her everywhere and I know he was going to kill her, but he never did which makes this more creepy.

So I watch a lot of book tube and people love that book (Katytastic) so I decided that if everyone loves this book so much, then I better read it. Plus it was on bookoutlet really cheap, so I had to get it then.

It was a a very fun book, not really the shitty things that happened, but how different and dynamic the plot and characters were. You don't often read about chimeras, if at all. This is actually the first book I've ever read with them in it. Plus Akiva. I love me some Akiva.

My favourite character was probably Zuzanna because she is actually kind of hilarious and doesn't get enough credit as the best friend. Actually love her.

I would in fact recommend this to those who love a good love story, the action was also pretty good. It was mysterious and at times, suspenseful.

“Once upon a time, an angel and a devil fell in love. It did not end well.”


“Have you ever asked yourself, do monsters make war, or does war make monsters?”


“It's not like there's a law against flying.""Yes there is. The law of gravity.”