If you haven't read the Mortal Instruments Series by Cassandra Clare, then I would not suggest reading this post because it will contain SPOILERS. 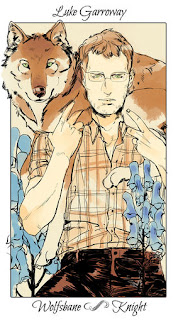 No one ever seems to talk about how amazing Luke is. He's a genuinely nice guy who has overcome a lot. Being turned into a werewolf, one of his best friends turning on him, being told he is a monster because of what was done to him, being cast out from the only life he has ever known, his own sister turning him away because he's a "monster, his other best friend and the woman he loves falling in love with the first mentioned best friend. Luke has been through some things and it would be completely understandable if he was bitter.

But instead of being incredibly bitter and terrible, he was there for Jocelyn when she needed him after escaping Valentine. He helped her keep the Shadowhunter world a secret from Clary her whole life to protect her.

And even though Luke was in love with Jocelyn probably his whole life, he was never bitter about being "friend zoned". He understood where Jocelyn stood with everything and didn't try to push her, or tell her that she had to choose or do any other boneheaded move that could have been done. Luke was just a decent man.

He also loved her child like that child was his own. When Jocelyn was in a coma and couldn't be around to see how Clary was being treated by Luke, Luke treated her like a decent human being would. You're probably wondering why I'm complimenting him for such basic things, but honestly, most people real and fictional aren't always the greatest. A lot seem like good people but the moment your back is turned they do things. I just wanted to say that I appreciate Luke because he was the one constant in the series. The one person who was always there for them, even in the first book when Clary thought he didn't care about her.

I love Luke so much and I'm glad he got his happy ending with Jocelyn. I'm glad she came to her senses and realized how great he is and married him. I need me a Luke.