City of Skies
by Farah Cook 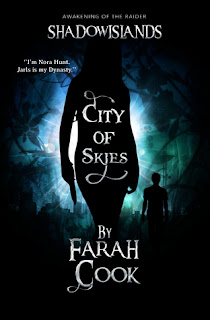 ONE GIRL. A DEADLY QUEST. AN EPIC JOURNEY.
In the post-apocalyptic dystopian nation known as Triangle of Peace, Nora Hunt, a Norse descendant, has just embarked on the deadly quest to discover the ancient Viking mystery of the hidden Shadowislands. At sixteen years old, the skilled young warrior joins an elite band of sword-wielding treasure hunters—the Jarl Raiders. They will fight the dangerous battle for the Shadowislands against the competing Rognvald Dynasty, a group of Dark Raiders led by the mysterious Frederick Dahl. When Nora learns the Viking gods blessed her with special powers, the stakes are higher than ever to claim the heavenly kingdom and crown. But can she overcome her romantic feelings for Frederick, who seems to both threaten and protect her? Or will she fall in love with the charming boy who just happens to be her worst enemy, jeopardizing her claim to the historic Viking legend?

Follow Nora Hunt’s action-packed adventure as she fights deadly beasts that guard the ancient myth of the Shadowislands in this epic fantasy saga, throbbing with battles between Viking clans.

I gave this book 4 stars. Once I got into it I couldn't seem to put it down, I just wanted to keep going. There were some parts in the beginning that had me a bit iffy, but as I got further in, that was a nonissue.

One of the characters was very polarizing and I found it a bit distracting. I'm also very curious as to why he wears fake tan. That topic was sort of touched upon during the book, but I'm still left with questions. I really shouldn't have been caught on that one detail for so long.

Other than that I thought this book was refreshing. It was like a weird mix of our world and something completely different. I'm pretty sure it was meant to be dystopian, and it was, but it felt like a fantasy or sci-fi novel. It was a dystopian that felt like a fantasy.

The writing style was formal, but still seemed like a teen was speaking. Sort of like if an English major was writing about her adventures in the real world and wanted to be thorough. I can't say that I didn't like it or appreciate it.

Overall, I found the story and the writing very addicting and I can't wait to see where the author goes with the series. I hope to be getting to those once the author writes them.
Posted by Jessie at 16:30