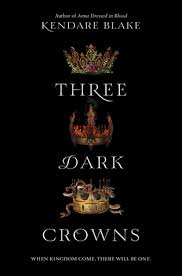 Every generation on the island of Fennbirn, a set of triplets is born: three queens, all equal heirs to the crown and each possessor of a coveted magic. Mirabella is a fierce elemental, able to spark hungry flames or vicious storms at the snap of her fingers. Katharine is a poisoner, one who can ingest the deadliest poisons without so much as a stomachache. Arsinoe, a naturalist, is said to have the ability to bloom the reddest rose and control the fiercest of lions.

But becoming the Queen Crowned isn’t solely a matter of royal birth. Each sister has to fight for it. And it’s not just a game of win or lose…it’s life or death. The night the sisters turn sixteen, the battle begins. The last queen standing gets the crown.

If only it was that simple. Katharine is unable to tolerate the weakest poison, and Arsinoe, no matter how hard she tries, can’t make even a weed grow. The two queens have been shamefully faking their powers, taking care to keep each other, the island, and their powerful sister Mirabella none the wiser. But with alliances being formed, betrayals taking shape, and ruthless revenge haunting the queens’ every move, one thing is certain: the last queen standing might not be the strongest…but she may be the darkest.

I gave this book 4.5 stars. I can honestly say that I didn't expect to like this book as much as I did. It was a bit slow at the beginning, but it did eventually pick up and it was amazing.

I expected all of the sisters to be really sneaky and to be huge backstabbers, but they really weren't. It was a happy surprise. I'm still a bit on the fence about liking Katherine, but I really like Arsinoe and Mirabella. None of them want to die, but they have different ways about going through all of this.

I liked how all of the sisters had very distinct yet different personalities. Katherine was a bit naive, but at the same time she was still very ambitious. She was very vulnerable and let Peityr in and that didn't exactly have a great outcome. She has learned from this and I'm looking forward to seeing how she develops in the next book.

Arsinoe is strong. She doesn't care about being good looking, more about keeping the people she cares for safe, and hopefully surviving through the trials. She is fiercely loyal and will fight anyone and anything.

Mirabella was the greatest surprise. We don't get to hear about her until after we have read from her sisters' points of view first and it seems as if she is the cold and calculating one the one who will surely survive the trials, but then as we delve deeper into her head it is revealed that she isn't a bad person. Not at all, she still thinks about her sisters all the time. She worries about them and hopes they are safe. She cares for her close friends so much. Loves them so dearly. She really doesn't want anyone to die.

I feel like it has become a trend for me to sort the main characters of books into Hogwarts houses so I think I'm going to do that. Katherine is in Slytherin, she is into learning things that could help her, she has also proven to be very ambitious. She wants to win and become the queen.

Arsinoe is a Gryffindor, she will do what she has to do to protect her friends, even face a huge fricken bear and fight it off. She's courageous and that's what I love most about her.

Mirabella is a Hufflepuff. She just cares about everyone so much. She isn't evil, she believes in the good of people. Also, she found Joseph when he needed her the most *wink*.

Now the whole Jules, Joseph, Mirabella thing was a huge clusterfuck. At first I was really hardcore about Jules and Joseph, I thought they were so cute together. They were childhood friends, they never stopped loving each other, it was like it was meant to be. Then all of a sudden Mirabella finds Joseph after he almost drowns. They have their whole love fest and when I found out who he was, I gasped so loudly and yelled "DRAMA!" so loudly I startled my friends. I really love Joseph with Mirabella too. I mean they have so much chemistry together, they just can't seem to be able to stay away from each other. I just wish that Joseph hadn't cheated. I hate cheating.

Now as much as I ship them together, I just don't think it will last. I think they are just in lust, not love. I don't know, it could head in the love direction, I can't know since I'm not the author, but you never know.

I loved that one part of the book where Junior came to bow to the Queens, but he didn't bow to Katherine or Mirabella, just to Arsinoe. I just loved it. It was just such a sassy thing to do. I love sass.

My absolute favourite part, however, was the scene when the Priestesses decided that Arsinoe had to die and they were about to kill her and then Mirabella was like, "Um, I think not." and jumped in front of Arinsoe and had all her elements and stuff manifest themselves and she scared everyone away and the two of them had a little talk and it made me smile. Arise seemed to be determined to kill Mirabella later during the trials, but I think in that moment it was proven to her that her sister was not who she thought she was. I don't think Arsinoe will be able to kill Mirabella if the time comes.

When I first finished the book I didn't even realize that there was supposed to be a sequel so I was just sitting there like "What the hell? What happens next? What?!?!?!?!?" I finally calmed down enough to search it up and thankfully there is going to be another book and I'm so sad that it has to come out a year from now. I read it too soon and now I can't wait.

“His eyes, when they meet hers, are like the storm. Perhaps he is not a boy at all, but some elemental thing, made by the crashing water and the endless thunder.”

“I want revenge." She whispers, and her fingers trail bloody streaks down Natalia's arms."And then I want my crown.”