Magnus Chase and the Gods of Asgard: The Hammer of Thor by Rick Riordan

Magnus Chase and the Gods of Asgard: The Hammer of Thor
by Rick Riordan 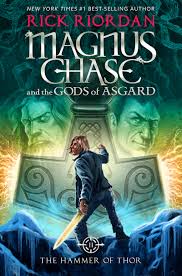 Thor's hammer is missing again. The thunder god has a disturbing habit of misplacing his weapon--the mightiest force in the Nine Worlds. But this time the hammer isn't just lost, it has fallen into enemy hands. If Magnus Chase and his friends can't retrieve the hammer quickly, the mortal worlds will be defenseless against an onslaught of giants. Ragnarok will begin. The Nine Worlds will burn. Unfortunately, the only person who can broker a deal for the hammer's return is the gods' worst enemy, Loki--and the price he wants is very high.

I gave this book 4 stars. I really liked it. It was a good book. I took away a star because I didn't love it, that may be because of my reading mood. I may have to go through and read it again and I'll probably enjoy it a lot more. I just wasn't in much of a mood for it.

I loved Alex. Alex has won my heart in just one book. Alex is a very complex character. Alex is gender fluid, which is why I am doing my very best to avoid pronouns. Alex is just so badass and snarky. I love his/her personality. I don't know about anyone else, but I ship Alex and Magnus. I think they would make a fantastic couple. Being snarky and sarcastic together. It would be magical.

I was honestly so mad that Magnus cut his hair! HE CUT HIS KURT COBAIN HAIR!!! I love Kurt Cobain and I loved the fact that Magnus looks like him. This was just a random small detail that my mind latched onto when reading. It's a bit stupid, but I was upset.

It was mentioned a couple times in the book that gods really like the Chase family. I find that really interesting, I hope it goes into more detail on that in the next book. I want to know why the Chase family specifically is so special.

As always Rick's humour shone threw. If I've ever read a Rick Riordan book and disliked the plot, the humour has always saved it. I don't know why I used that example because I've never disliked one of his books before. Theoretically though, if he were ever to write a book where I wasn't too impressed with the plot, I wouldn't even care because his books are always so funny. My favourite part of this book was the chapter titles. They were funny, yet still conveyed what would happen in the chapter.

One thing I wish we would have gotten more of is when they have those cool fights in the hotel. They team up and fight amongst themselves. We got one scene in the first book, I loved that, but I want another one!

Hearth is so cute. He has become one of my favourite characters. Absolutely adorable. I was just so mad about the way his father treated him. He just kept calling him and embarrassment and blaming everything bad on him.

Knowing Rick's past works, this is really nothing int he chaos department. Which means, the next book is going to be the end of the world. Also, Percy is finally going to be in the series! So excited.

Thankfully the next book doesn't come out till November 2017, and I have a long time to finish the Heroes of Olympus series, because for some reason I still haven't gotten around to the last two books. Shame on me.


“Sam's phone buzzed. She fished it out of her pocket, checked the screen, and cursed. "I have to go.""You just got here.""Valkyrie business. Possible code three-eight-one: heroic death in progress.""You're making that up.""I'm not.""So...what, somebody thinks they're about to die and they text you 'Going down! Need Valkyrie ASAP!' followed by a bunch of sad-face emojis?”

“Look, some people prefer they,’ Alex said. ‘They’re non-binary or mid-spectrum or whatever. If they want you to use they, then that’s what you should do. But for me, personally, I don’t want to use the same pronouns all the time, because that’s not me. I change a lot. That’s sort of the point. When I’m she, I’m she. When I’m he, I’m he. I’m not they. Get it?’‘If I say no, will you hurt me?’‘No.’‘Then no, not really.’She shrugged. ‘You don’t have to get it. Just, you know, a little respect.’‘For the girl with the very sharp wire? No problem.’She must have liked that answer. There was nothing confusing about the smile she gave me. It warmed the office about five degrees.”

“At this point, most people would have thrown themselves down on the ground and given up hope. And by most people, I mean me.”

“I turned to Alex. 'Hey, are you female today?''Hold on... There! Now I'm female.'My expression must have been priceless.Alex burst out laughing. 'I'm kidding. Yes, I'm female today. She and her.”